(Votes:16, Average:4.8)
Please share Your opinion and comments in the Facebook-comment box below the player! If the radio lags, or breaks, please send us a message on the Contact page! If the radio doesn't start at all, try to check the Troubleshooting page to find a solution! 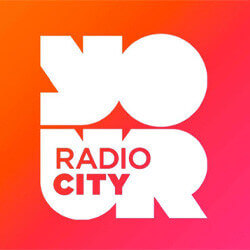 Listen online to the internet radio of Radio City live here, on UK Radio Live!
Radio City is in Bauer Radio Ltd.’s ownership, and member of the Planet Radio radio station group with 285.000 weekly listeners.
Radio City as part of Bauer's Hits Radio Network is responsible for the local programming supply of Liverpool and the North West. Besides that, also networked programming by Bauer's Hits Radio Network fills up the programme structure. Part of the networked programming is "The UK Chart Show", which is broadcasted on Sundays from 4pm to 7pm, which is Bauer's own, brand-new chart show led by Sarah-Jane Crawford, with the hottest 30 songs.
Radio City’s musical line-up comes from the last 15 years’, and plays the most popular hits, aligned with talk-shows, phone-ins, and Liverpool and North West related news, sports, travel-traffic and weather updates.
Liverpool’s mornings start with Leanne Campbell and Scott Hughes in Radio City’s breakfast show “Leanne and Dave at Breakfast” on weekdays from 6am to 10am.

Radio City availability: You can tune in to Radio City with your traditional analogue radio on 96.7 FM in the area of Liverpool and the North West, and the digital solutions are also available. We recommend the online radio stream.

SMS: 63103 - Please start your message with “CITY”
(Get informed by your network provider about SMS service costs)

Heart FM
Shaggy - It Wasn't Me

Virgin Radio UK
The Calling - Wherever You Will Go

BBC Radio 5 Live
Up All Night

Magic Soul
Jimmy Ruffin - What Becomes Of The Broken Hearted

Radio X
Stereophonics - The Bartender And The Thief

Scott Hughes returns to Radio City for Breakfast
Former Radio City Drive presenter Scott Hughes is returning to the station to co-host Breakfast with Leanne Campbell. Scott joined the Breakfast team of Leanne and Dave on air this morning to make the special announcement. Dave Kelly is leaving the station this Friday for a new gig in the Cayman Islands. Scott Hughes told RadioToday: “I can’t wait to join Leanne on Radio City Breakfast. It’s always been on my bucket list to do this show as it’s so iconic to both the industry and the listeners. I can’t wait to be back on-air in the greatest city in the world! I’m absolutely buzzing.”...More >>
radiotoday.co.uk - 24.03.2020
Nominations for the 2020 IRN Awards revealed
The nominations for the 2020 IRN Awards have been announced by Sky News presenter Kay Burley. There are 12 categories including the Student Journalist of the Year prize which is supported by the Broadcast Journalism Training Council. The awards event itself will take place at Sky Cinema in west London on Thursday 26th March 2020, also hosted by Kay. IRN Editor and Chair of Judges, Dave Terris said: This is a stellar list of nominations representing the gold standard in commercial radio news and sport...More >>
radiotoday.co.uk - 12.02.2020
Radio City’s Dave Kelly to leave Breakfast Show
Breakfast Show co-host Dave Kelly is leaving Radio City in March to take up a full-time live show on X1071 in the Cayman Islands. Co-host Leanne Campbell is staying with the station and has just signed on for another two years at Breakfast. Dave moved to Liverpool in 2011 to be the host of Radio City’s Drive show before moving to co-host the breakfast show with Leanne in 2014. He has been hosting a daily pre-recorded show on X1071 for the last eight years and also hosts programmes on Z953 in Vancouver and Radio Essex. Dave also produces The Hix Mix, a syndicated show available for radio stations to air...More >>
radiotoday.co.uk - 21.01.2020
Former Radio City host Scott Hughes joins Virgin Radio Anthems
Former Radio City afternoon drive presenter Scott Hughes has joined Virgin Radio Anthems to host the weekday afternoon show. Scott took over the programme on November 25th and can be heard on the national digital station Monday to Friday from 2pm till 6pm slot and Saturday mornings from 10am. Talking about his new show, Scott Hughes told RadioToday: “I’m so happy to have joined such an amazing team of people, and to be on a station that plays such great music. I’m very excited about the future of the Virgin Radio UK stations in 2020.”...More >>
radiotoday.co.uk - 09.12.2019
Bauer to network drivetime across 11 licences in North and Midlands
Bauer Media has announced plans to network Wes Butters and Gemma Atkinson across most of its big city stations in England, meaning 7 presenters will lose their daily drivetime show. From 2nd September, Wes will be on 4-7pm across Metro Radio, TFM, Rock FM, Radio City, Hallam FM, Radio Aire, Viking FM and the four Free Radio stations in the West Midlands – in addition to his current show on Hits Radio in Manchester and on DAB across the UK. Gemma will join the show after her maternity leave...More >>
radiotoday.co.uk - 05.08.2019
Bauer design agency reveals Hits Radio national roll-out
One of Bauer’s design agencies has offered an insight into the future of the Hits Radio brand after writing about its recent work on its website. Thinkfarm, which works with Bauer designing and promoting some of its radio stations, created the brand identity and marketing campaign for Hits Radio. It appears to confirm that Hits Radio will replace regional brands to create one national station.More >>
radiotoday.co.uk - 11.04.2019
Greatest Hits Radio launches with new line-up
Greatest Hits Radio has launched on FM, AM and DAB in a number of regions across England, with Mark Goodier joining the network for a daily programme. The former BBC Radio 1 and Smooth Radio presenter will present the mid-morning show, and joins a team of presenters already established on the network. Here’s how the schedule looks each weekday in England:...More >>
radiotoday.co.uk - 06.01.2019
Hits Radio to launch own UK Chart Show
Bauer is to broadcast its own chart show each Sunday afternoon following its decision to drop the Official Big Top 40 from Global. The UK Chart Show will broadcast every Sunday 4pm till 7pm with Sarah Jane Crawford across the Hits Radio Network from this Sunday, 6th January 2019. The programme will play “the hottest 30 tracks in the UK, airing what audiences are listening to, streaming, watching and downloading that week...More >>
radiotoday.co.uk - 04.01.2019
RAJAR Q3 2018: Regional and local radio round-up
Manchester is once again our focus on the local radio round-up, where the station previously known as Key 103 has lost more listeners. Hits Radio (Manchester) is reporting 325,000 weekly reach, compared with 374,000 last quarter. This is half the amount of listeners it had four years ago. Newly rebranded Key Radio (previously Key 2) has 53,000 listeners compared with 81,000 three months ago. Hits Radio’s Market Share has dropped from 5.2% to 3.9% and hours are down by 561,000 in three months.More >>
radiotoday.co.uk - 25.10.2018