(Votes:60, Average:4.3)
Please share Your opinion and comments in the Facebook-comment box below the player! If the radio lags, or breaks, please send us a message on the Contact page! If the radio doesn't start at all, try to check the Troubleshooting page to find a solution! 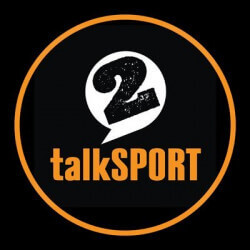 Listen to the internet radio of talkSPORT 2 live, which 2 is the sister station of talkSPORT radio, launched in 2016 for expanding the broadcasting time to the increasing amount of broadcasting rights of the parent station. talk SPORT 2 is distributed only digitally and is in the ownership of Wireless Group.
As a loyal adjutant of its parent station, the radio helps to cover concurrent sports events, and sustains the enthusiastic commitment in the mission of broadcasting, analyzing, and debating the sports’ world.

The broadcast is not available on the traditional analogue radio way, but on the digital solutions like DAB Digital Radio, we recommend the online radio stream.
Your favourite radios
Heart Xmas
Paul McCartney - Wonderful Christmastime

Gold Radio
The Beatles - Something

Virgin Radio UK
The Fratellis - Whistle For The Choir

Forth 1 - Forth One 97.3
Garry Spence's Saturday Night Anthems

talkSPORT to broadcast India versus New Zealand Test series
talkSPORT is expanding its international cricket coverage to exclusively air India’s Test series against New Zealand. The two Test series starts on Thursday November 25 and is the first time the two sides have met in the format since The ICC World Test Championship final at Southampton in June, with all coverage on talkSPORT 2...More >>
radiotoday.co.uk - 22.11.2021
talkSPORT to broadcast rugby’s Autumn Nations Series
talkSPORT will broadcast rugby’s Autumn Nations Series in the UK for the first time ever on the network. Coverage will include 50 exclusive matches to broadcast over the next three years starting on October 30th. The new audio rights follow talkSPORT’s coverage of the Lions tour this summer, as the players head back to their specific countries to compete in the internationals being held across the UK, Ireland, France and Italy...More >>
radiotoday.co.uk - 21.10.2021
talkSPORT to cover Chris Eubank Jr v Anatoli Muratov through new deal with Boxxer
talkSPORT will be exclusively broadcasting commentary of Chris Eubank Jr continuing his road to major World title contention against Anatoli Muratov from The SSE Arena, Wembley on Saturday, after reaching a deal with Boxxer. As part of the three-fight deal, the network also has exclusive rights to broadcast one-time British champion Lewis Ritson’s homecoming from the Utilita Arena Newcastle on Saturday 16 October...More >>
ontheradio.co.uk - 29.09.2021
Radio coverage of the NFL is returning to talkSPORT
The NFL is returning to talkSPORT including both London games and all the live action from the US. The live Primetime Sunday Night Football will be broadcast every week at 1am on talkSPORT 2, which kicked off with the Green Bay Packers versu the San Francisco 49ers last night, with both London games live on talkSPORT 2 on Sunday 10 and Sunday 17 October at 2pm...More >>
radiotoday.co.uk - 27.09.2021
talkSPORT offers two England v Scotland commentaries
Two different teams of commentators will be working at talkSPORT on Friday night as England plays Scotland at Wembley. There will be an England-focused commentary on talkSPORT and a Scotland-focused commentary on talkSPORT 2, providing a choice for England and Scotland fans. On talkSPORT there will be commentary from Jim Proudfoot, Stuart Pearce, and Sol Campbell, plus analysis from Jose Mourinho, whilst on talkSPORT 2 Shebahn Aherne will present alongside pundits Andy Bargh and Paul Dickov...More >>
radiotoday.co.uk - 15.06.2021
talkSPORT to broadcast Lions Tour of South Africa coverage
talkSPORT is promising over 150 hours of exclusive Lions coverage for the upcoming Lions Tour of South Africa in the World Champions. Alongside commentary of every Lions match including the three Test series, talkSPORT will deliver previews, post-match analysis, phone-ins and bring all the colour from South Africa to supporters in the UK. The talkSPORT network will broadcast bespoke previews ahead of all Tests, a daily Lions Diary programme on talkSPORT 2...More >>
radiotoday.co.uk - 06.05.2021
Jose Mourinho joins talkSPORT for the Euros
Jose Mourinho has signed to talkSPORT for the network’s coverage of the Euros, starting in June. He’ll be with listeners across the schedule from talkSPORT’s live Euro GameDay programming to regular slots at Breakfast which will include pre-game insight and a post-game phone in for talkSPORT listeners. He will be part of the team for all three England group games, one last 16 game, two Quarter Finals, one Semi Final and the Final...More >>
radiotoday.co.uk - 05.05.2021
talkSPORT joins Social Media Boycott weekend
talkSPORT has joined the social media boycott announced by English football in response to the ongoing and sustained discriminatory abuse received online by players and many others connected to football. talkSPORT and talkSPORT 2 will not publish any content across their social media channels starting at 3pm on Friday until Tuesday May 4. The boycott aims to encourage the government to bring forward Online Harms legislation as a matter of urgency, to help keep people safe online...More >>
radiotoday.co.uk - 28.04.2021
talkSPORT team announced for cricket coverage
talkSPORT is covering England’s tour of India, starting next month, with every ball of every game live on talkSPORT 2. Ashes winner Kevin Pietersen will join the team for its free-to-air coverage of the four Tests, five T20s and three ODIs, which start on February 5th and conclude on March 28th. The broadcast team includes talkSPORT cricket regulars, Darren Gough, Mark Nicholas, Mark Butcher, Matt Prior, Steve Harmison, Gareth Batty, Alex Tudor, Neil Manthorp, Jarrod Kimber, Jon Norman, Guy Swindells and Andrew McKenna. Kate Cross also joins the team when she returns from representing England in New Zealand alongside former India batsman and commentator Aakash Chopra...More >>
radiotoday.co.uk - 21.01.2021