(Votes:41, Average:4.8)
If the online broadcast of Capital XTRA doesn't start, or lags, please contact us on the Contact page, or try to find the error on the Troubleshooting page. 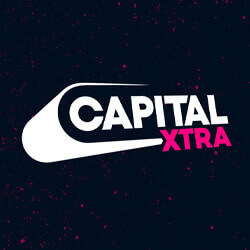 Listen to the internet radio of Capital XTRA live, which is the genre specialized sister station of Capital FM. The radio is in the ownership of Global Media & Entertainment Ltd. The station is the successor of Choice FM since its rebranding in 2013. So the broadcaster continues the fundamentals of Choice FM, furthermore explores the future of the urban dance music style, thereby modernizes the broadcasting of rhythmic contemporary, especially black music. The station's main genres are the hip-hop, RnB, urban and dance.
The radio set the rhythm of the mornings with the "Breakfast with Yinka & Shayna Marie" on weekdays from 6:30am to 10am.

Capital FM
Wizzard - I Wish It Could Be Christmas Everyday

DJ On Tap
Taylor Swift - Back to December

Nation Radio
Chesney Hawkes - The One and Only

Boom Radio
Gwyneth Herbert - Only Love Can Break Your Heart

3FM Isle of Man
Oasis - Don't Look Back In Anger

JACKfm
Keane - Is It Any Wonder

SunKiss
Red Hot Chili Peppers - Not the One

DJ and presenter Omah Howard to host Capital XTRA evening show
Capital XTRA has signed KISS DJ and presenter Omah Howard to host the Capital XTRA Evening Show. Omah will be on-air Monday to Thursdays from 7pm – 10pm, starting tonight, Monday 5th September. He’s been doing weekends at KISS recently, and was a previous...More >>
radiotoday.co.uk - 05.09.2022
Capital Xtra gets new sonic audio identity from On The Sly
Capital Xtra has a new sonic identity from audio production company On The Sly. They’ve created a brand new sound for the national station with sung logos and production elements...More >>
radiotoday.co.uk - 28.08.2022
Award winning DJ Robert Bruce named as new co-host for Capital XTRA Breakfast
The Capital XTRA Breakfast Show has a new line-up from this Monday as Robert Bruce joins Shayna Marie to co-host the show. Robert has been with Capital XTRA since 2017, working his way up through the ranks and earning praise from artists, the industry and listeners for his highly knowledgeable interviews...More >>
ontheradio.co.uk - 06.08.2022
Tim Westwood steps down from CapitalXTRA radio show
Tim Westwood will not be presenting his Saturday night radio show at CapitalXTRA until further notice. He’s stepped down following claims of sexual assault from several women which he strongly denies. Global confirmed the news in a statement, saying: “Following the claims that have recently come to light, Tim Westwood has stepped down from his show until further notice.”...More >>
radiotoday.co.uk - 27.04.2022
New programmes and presenters at Capital and Capital XTRA
A schedule refresh at Capital and Capital XTRA means new shows for Rio Fredrika, Jay London, Niall Gray, Chris Ros, Kamilla Rose & Kemi Rodgers plus Global Academy graduate Dynamic. Rio Fredrika, who hosts weekday breakfast on Capital Dance, will present a brand-new Saturday morning show across the Capital network from 9am – 12pm...More >>
radiotoday.co.uk - 31.03.2022
Stuart Grant to raise money for Brain Tumour research
Former Global manager and KISS FM presenter Stuart Grant is preparing to take part in a fitness challenge to help fund Brain Tumour research. Stuart, who was diagnosed with a brain tumour in January 2019, also previously ran Choice FM and Capital Xtra, and was managing editor at Heart Sussex and Surrey. He will be taking part in the Brain Tumour Research charity’s 10,000 Steps a Day in February Challenge...More >>
radiotoday.co.uk - 25.01.2022
Yasser joins Global to host Capital XTRA weekday Drive
Ex-BBC Asian Network drive-time presenter Yasser Ranjha has joined Global to host a new weekday show on Capital XTRA. From today he’ll be on Drive with the station’s playlist of Hip-Hop & RnB anthems between 4pm and 7pm. Yasser said: “I’m thrilled to be joining Capital XTRA and cannot wait to get started on the drive show...More >>
radiotoday.co.uk - 04.01.2022
In photos: Global’s Make Some Noise raises over £2.7 million
Global’s Make Some Noise has raised over £2.7 million for small charities that help disadvantaged people across the UK after a day of on-air activities. All of its radio brands came together – Heart, Capital, Classic FM, Smooth, LBC, Radio X, Capital Dance, Capital XTRA and Gold – to raise funds and awareness for small charities in local communities across the UK, including food banks, mental health and domestic abuse helplines...More >>
radiotoday.co.uk - 08.10.2021
DJ and broadcaster Teeshow joins Capital XTRA
DJ and broadcaster Teeshow is joining Capital XTRA to host a brand-new Friday night show. Teeshow is the host of Link Up TV’s ‘The Checkpoint’ and has toured with Hardy Caprio and Big Tobz as their official tour DJ. Capital XTRA’s brand new Friday night schedule will see Teeshow host 7pm – 9pm, before DJ Semtex plays rap and hip-hop from 9pm – 11pm, with Shayna Marie continuing the Friday night vibes from 11pm – 1am...More >>
radiotoday.co.uk - 14.05.2021