(Votes:31, Average:4.7)
Please share Your opinion and comments in the Facebook-comment box below the player! If the radio lags, or breaks, please send us a message on the Contact page! If the radio doesn't start at all, try to check the Troubleshooting page to find a solution! 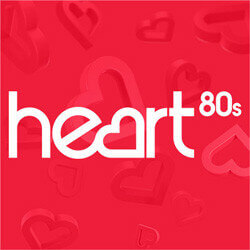 Listen to the internet radio of Heart 80s live, home of 80s music, Heart’s digitally distributed sister station, with specialized musical selection. Heart 80s Radio is in the ownership of Global Media & Entertainment Ltd.
The radio's playlist does not select only from the 80’s, but from the late 70’s too. Because there were many songs in the late 70’s which became popular hits then, and kept their popularity also in the 80’s, so essentially affected the 80s musical era. Thus the station broadcasts not just the 80’s songs, but the extended whole life-feeling what permeated the eighties' musical world.
The 80’s in the musical world was the step, when the use of synthesisers became common, and thus the effects, and earlier unimaginable sounds and tunes became inseparable parts of the music. Digital solutions had revolutionized the music industry, and gave more freedom to the musicians who could express their artistic passion more freely.
The broadcaster offers morning shows from Monday to Saturday with Neil 'Roberto' Williams on weekdays between 6am and 10am, and on Saturday from 8am to 12pm.

The broadcast is not available on the traditional analogue radio way, but distributed nationally on the digital solutions like DAB Digital Radio and on Sky - Channel 0112, we recommend the online radio stream.
Your favourite radios
LBC Radio - LBC 97.3
Clive Bull

Q Radio
Leah Kate - 10 Things I Hate About You

Radio X
The Killers - When You Were Young

Heart Dance
Kurtis Mantronix Presents Chamonix - How Did You Know

Sun FM
Prince - The Most Beautiful Girl In The World

U105
Reo Speedwagon - Keep On Loving You

SunKiss
Benny Andersson - Thank You For The Music

Radio Essex
Fugees - Ready Or Not

Pussycat Doll Ashley Roberts joins new radio station Heart 00s
Ashley Roberts, who sold tens of millions of records worldwide in the noughties as a member of The Pussycat Dolls, is joining new station Heart 00s to host her first ever solo radio show. Heart 00s, which launched across the UK today at 12 noon, joins sister stations Heart 70s, Heart 80s, Heart 90s and Heart Dance on DAB Digital Radio, on Global Player on smart speakers and online, playing hits of the 00s...More >>
ontheradio.co.uk - 20.05.2022
RAJAR Q1 2020: London and national brands roundup
BBC Radio 2 has lost almost a million listeners in the last year, according to the Q1/2020 audience research from RAJAR. The reach of the UK’s biggest radio station fell from 15.356m at the start of 2019 to 14.362m over the first three months of this year. The two biggest commercial radio networks – Heart and Capital – both lost significant reach over the 12 months too. The Heart network lost 787,000 listeners to leave a reach of 7.737m, while Capital dropped 815,000 to 6.386m. When you add in the other Heart and Capital branded stations – 70s, 80s, 90s, Dance, Xtra and Xtra Reloaded – the Heart brand reaches 9.365m and the Capital brand 7.502m...More >>
radiotoday.co.uk - 14.05.2020
Heart 90s to launch on national DAB digital radio
Global is transforming its Heart 90s playlist service into a full national radio station on DAB, with Kevin Hughes hosting breakfast. It’s the first of five new services all going national on DAB in the next week – as teased by Global over the last few days. Heart 90s will officially launch tomorrow at 6am – Thursday 29th August – with non-stop music from the 90s and joins Heart, Heart Dance and Heart 80s which all have live national breakfast shows from Leicester Square. Kevin Hughes currently hosts Saturday afternoons on Heart, and previously presented Drive on Heart South Wales...More >>
radiotoday.co.uk - 28.08.2019
Global to launch Heart Dance with Toby Anstis on Breakfast
Heart Dance, a new service from Global, is launching on DAB digital radio across the UK this Friday 21st June. The Club Classics formatted station will have former Heart presenters Toby Anstis on the breakfast show, and Lucy Horobin on afternoon drive. Lucy will also be presenting a weekend show every Saturday from 10am – 1pm. Heart Dance will play club classics from the likes of Basement Jaxx, Daft Punk, Ne-Yo, Ultra Naté, Fatboy Slim and Armand Van Helden.More >>
radiotoday.co.uk - 17.06.2019
RAJAR Q1 2019: Milestones reached for DAB and digital radio
Digital listening has reached a new record share of 56.4%, up from 50.9% in Q1 2018, according to RAJAR Q1 2019 data released today. The annual growth of 5.5 percentage points to 56.4% from 50.9% represents the strongest ever percentage point growth in digital listening platform share since records began. Digital reach increased by over 2 million listeners to 36.3 million and overall digital listening grew by 55.9 million hours or by 10.7% year on year.More >>
radiotoday.co.uk - 16.05.2019
RAJAR Q1 2019 – Zoe & Chris plus national and London radio round-up
Chris Evans and Virgin Radio both reached over a million listeners in the first quarter of 2019. The digital station’s audience has almost trebled compared with the last period of 2018 thanks to the arrival of Evans from Radio 2. In Q1/2019 it posts a weekly reach of 1.3m and total hours of 7.765m. A year ago those figures were 427,000 and 1.632m. Last quarter they were 447,000 and 1.686m.More >>
radiotoday.co.uk - 16.05.2019
RAJAR Q3 2018: Record share of 52.4% for digital radio
Digital listening share has remained above the important halfway mark and increased from 48.8% to 52.4% in the last 12 months. Total digital listening hours grew by 5.4% year on year, or 27.5 million hours. DAB listening in cars accounted for 11 million hours (or 40%) of all digital listening growth, while listening in home via online/Apps accounted for 13.5 million hours (or 49%) of all digital listening growth.More >>
radiotoday.co.uk - 25.10.2018
RAJAR Q3 2018: London and national brands update
Nick Grimshaw left the BBC Radio 1 Breakfast Show with half a million more listeners than a year ago – handing them to Greg James who took over the show halfway through the last quarter. The show now attracts 5.75m listeners (Mon – Fri) and is up 465,000 Year on Year. In London, Capital is back on top with almost 2,100,000 listeners according to Reach in the London commercial radio battle, as Kiss slips back under the 2m listener mark (1,958,000). Magic is in third place (1.5m) whilst Heart comes in 4th (1.4m). But BBC Radio 4 continues to lead the London Reach with 2.4m listeners.More >>
radiotoday.co.uk - 25.10.2018
RAJAR Q2 2018: London and national brands update
Kiss has taken over from Capital as the biggest commercial radio station in London in the latest Q2/2018 RAJAR listening figures. Capital’s audience in the capital is down 10.8% year on year to 2.063m, while Kiss has had a great quarter, hitting 2.087m weekly listeners – 24,000 more than its rival. In third place is Magic (1.667m), which leapfrogs rival Heart this quarter (1.404m). LBC is in fifth on reach with 1.280m listeners in the capital (down 9.3% year on year).More >>
radiotoday.co.uk - 02.08.2018

03:35Bill Medley / Jennifer Warnes - Ive Had The Time Of My Life