(Votes:124, Average:4.4)
Please share Your opinion and comments in the Facebook-comment box below the player! If the radio lags, or breaks, please send us a message on the Contact page! If the radio doesn't start at all, try to check the Troubleshooting page to find a solution! 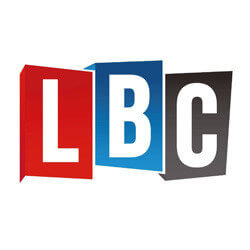 Listen online to the internet radio of LBC radio live, which was the first commercial radio station of the UK in 1973, and the most listened to talk radio in UK’s commercial radio segment. The radio has more than 2.4 million weekly listeners in the UK, and is in the ownership of Global Media & Entertainment Ltd.
The station's programme structure focuses on talk-shows about the most important UK related topics, and global politics. Emphasizes on giving opportunity to the listeners in expressing their own opinions about the major stories and to discuss the topics with the presenters. Moreover famous personalities, politicians are often guests in the call-in shows, so the listeners also have the chance to collide their viewpoint with public figures. LBC presenters are Nick Ferrari, James O’Brien, Shelagh Fogarty, Iain Dale, Steve Allen, Clive Bull, Tom Swarbrick, Maajid Nawaz, Rachel Johnson, Matt Frei, Andrew Castle, Nick Abbot, Andrew Pierce, Darren Adam, Denise Headley, Ruth Davidson, David Lammy, Natasha Devon, Daniel Barnett, Ian Payne, Eddie Mair and Dean Dunham.
The station's schedule sets the basis of the conversation with "Nick Ferrari at Breakfast" from 7am to 10am on weekdays.
In its mission of spreading information and conversation, the broadcaster has its adjutant sister station, which concentrates on the national and global news rather than live conversations.

You can tune to the radio's sister station below the player, moreover LBC News is included as individual station here, on UKRadioLive.

Website: https://www.lbc.co.uk
Phone: +44 0345 606 0973 (Check your phone provider about actual call costs)
SMS: 84850 (Get informed by your network provider about SMS service costs)
E-mail: comment[kukac]lbc.co.uk
You can find the presenters and programmes on the official website, and you can e-mail them here: https://www.lbc.co.uk/radio/presenters

Boom Radio
The Chi-Lites - Have You Seen Her

3FM Isle of Man
Blue Pearl - Naked In The Rain

Cheesy FM
Hot Chocolate - No Doubt About It

JACKfm
Manic Street Preachers - Your Love Alone Is Not Enough

Anna Raeburn & Sangeeta Pillai lined up for Radio Academy event
Radio presenter Anna Raeburn and podcaster Sangeeta Pillai will be joining host Emma B for the next online Radio Academy event. They will be celebrating International Women’s Day as they talk about pushing the boundaries in audio. Anna Raeburn made her name as a radio agony aunt on the Anna and the Capital Radio Doctor show, offering all manner of help and advice for listeners...More >>
radiotoday.co.uk - 01.03.2022
Details of Andrew Marr’s opinion-led LBC radio show announced
Andrew Marr will host an hour-long show four days a week on LBC starting March 7th. Tonight with Andrew Marr will air Monday to Thursday at 6pm on LBC and will also be televised live on Global Player. To make way for the new show, afternoon presenter Eddie Mair returns to his original time slot of 4pm to 6pm, Monday to Friday, handing the baton of the 6pm to 7pm hour to Marr...More >>
radiotoday.co.uk - 24.02.2022
Emily Maitlis & Jon Sopel join LBC to host brand-new show and podcast
Two of the UK’s leading broadcasters, Emily Maitlis and Jon Sopel are joining LBC to co-host a new show and major podcast for GlobalPlayer. Maitlis and Sopel join from the BBC, where Maitlis hosted Newsnight and Sopel was the corporation’s North America Editor. The pair also hosted the BBC’s critically-acclaimed Americast podcast, which explored the state of US politics...More >>
ontheradio.co.uk - 22.02.2022
Andrew Marr joins LBC and Classic FM in exclusive deal
Broadcaster and journalist Andrew Marr is leaving the BBC and has signed an exclusive deal which will see him present brand-new programmes on LBC and Classic FM next year. Marr will host a brand new, opinion-led programme, broadcast on LBC and fully visualized on Global Player where he will give his view on the biggest issues of the moment, along with agenda-setting guests...More >>
ontheradio.co.uk - 19.11.2021
LBC under fire following comments broadcast by Steve Allen
Tilly Ramsay has hit out at LBC’s early morning presenter Steve Allen following comments he made about her on Wednesday morning. Steve was talking about how Tilly Ramsey is on Celebrity Masterchef Australia. He said “She’s a chubby little thing isn’t she, probably her dad’s cooking” As a result, Tilly has posted feedback on her Instagram account saying being called out on a national radio station by a 67-year-old man is a step too far...More >>
radiotoday.co.uk - 21.10.2021
In photos: Global’s Make Some Noise raises over £2.7 million
Global’s Make Some Noise has raised over £2.7 million for small charities that help disadvantaged people across the UK after a day of on-air activities. All of its radio brands came together – Heart, Capital, Classic FM, Smooth, LBC, Radio X, Capital Dance, Capital XTRA and Gold – to raise funds and awareness for small charities in local communities across the UK, including food banks, mental health and domestic abuse helplines...More >>
radiotoday.co.uk - 08.10.2021
Journalist Camilla Tominey gets a weekend radio show on LBC
Camilla Tominey is joining LBC to present a brand-new Sunday afternoon show from 4pm till 7pm starting this weekend. Camilla will offer insight and insider knowledge to the station via her role as Associate Editor at the Daily Telegraph, covering Politics and the Royals. Camilla Tominey said: “Having listened to LBC for years, I am absolutely delighted to be joining the best radio station in Britain to exchange news and views with such a...More >>
radiotoday.co.uk - 01.07.2021
Cross Question with Iain Dale extends on LBC
LBC’s Wednesday night political debate programme, Cross Question with Iain Dale, has been extended to three nights a week, Monday to Wednesday, 8pm to 9pm. Broadcast live during Iain Dale’s evening show (7pm-10pm) from LBC’s Westminster studios, Cross Question puts listeners centre stage, as they question a panel of politicians and commentators on the big issues of the week. Launched in 2018, guests lined up for...More >>
radiotoday.co.uk - 27.05.2021
Winners announced for the Global Awards 2021
The winners of The Global Awards 2021 have been revealed with Dua Lipa picking up three awards. Now in its fourth year, The Global Awards brings together Capital, Heart, Smooth, Classic FM, LBC, Radio X, Capital XTRA and Gold, to honour the stars of music, news and entertainment. However, this year the LBC Award, previously won by Steve Allen, has been removed as a category, along the Best Podcast. The awards ceremony was unable to take place this year...More >>
radiotoday.co.uk - 03.05.2021