(Votes:27, Average:4.5)
Please share Your opinion and comments in the Facebook-comment box below the player! If the radio lags, or breaks, please send us a message on the Contact page! If the radio doesn't start at all, try to check the Troubleshooting page to find a solution! 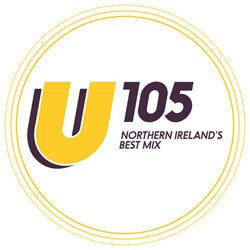 Listen to the internet radio of U105 live, which was launched in 2005 for the people of Greater Belfast by its analogue availability, and since then the coverage area had grown to the whole Northern Ireland by the digital solutions. The radio is in the ownership of Wireless Group.
The station's musical selection offers the best music from the so called Gold era, which means the greatest hits of 60s, 70s, 80s, 90s. The broadcaster finds the high quality information service important, so besides the music, hourly news bulletins keep the listeners informed with local, national and international news, traffic info and weather reports.
The radio announces itself as a personality-led station, which appears in the schedule by several programmes throughout the day. For example, the station has breakfast shows, but not just on weekdays, but on every day of the week. On weekdays, the broadcaster wakes up the listeners from 6am to 9am with Maurice Jay & Denise Watson, on weekends, the breakfast show is led by Jerry Lang from 7am to 10am. On weekdays, after the breakfast show, the "Phone-In with Frank Mitchell" show continues the human-faced broadcasting to 12pm. Moreover the radio brings several popular presenters of Northern Ireland to the microphone like Carolyn Stewart, Denise Watson, Frank Mitchell, Linda Cullen, Jerry Lang, Johnny Hero and Maurice Jay.

Greater Belfast - 105.8 FMThe broadcast is available on the analogue radio way, and on the digital solutions like DAB Digital Radio in Northern Ireland. We recommend the online radio stream.
Your favourite radios
LBC Radio - LBC 97.3

Gold Radio
T Rex - Get It On

Smooth Radio
Alicia Keys - If I Ain't Got You

Radio Caroline
The Kinks - All Day and All of the Night

DJ On Tap
The Masked Dj with great songs!

House Party Radio
Naill Horan - Too Much To Ask

Pure Radio
The Waterboys - The Whole Of The Moon

Manx Radio
Curtis Stigers - You're All That Matters To Me

45 Radio
Huey Lewis And The News - Stuck With You

Gold Radio
T Rex - Get It On

BBC Radio 2
Sounds of the 90s with Fearne Cotton

02:35Dusty Springfield - Son Of A Preacher Man
Get older songs