(Votes:39, Average:4.6)
If the online broadcast of Heart Dance doesn't start, or lags, please contact us on the Contact page, or try to find the error on the Troubleshooting page. 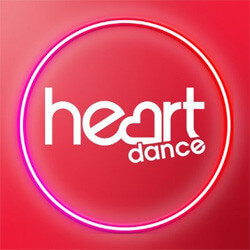 Listen to the internet radio of Heart Dance live, which is the dance music oriented sister station of Heart FM. Heart Dance radio is in the ownership of Global Media & Entertainment Ltd.
The radio's playlist is supervised by the parent station's most experienced dance music experts, who guarantee the usual high standards in the means of music. The weekday mornings are kicked in by Toby Anstis from 7am to 10am with the best club classics, and the weekdays' drivetime programme is hosted by Lucy Horobin from 4pm to 7pm, who also has a weekend show on Saturday from 10am to 1pm. The Saturday nights are illuminated by Pandora Christie who commands her three hours dance selection from 7pm to 11pm.

The broadcast is available on the digital solutions like DAB Digital Radio in the UK, we recommend the online radio stream without territorial restrictions.
Your favourite radios
Capital FM
B.O.B. / Bruno Mars - Nothin' On You

Smooth Radio
Billy Joel - She's Always A Woman To Me

Heart Dance
Black Legend - You See The Trouble With Me

Heart 90s
Meat Loaf - I`d Do Anything For Love

SunKiss
Jackie Wilson - I Get The Sweetest Feeling

Gaydio
Temple of Noize - in the mix

Toby Anstis late for Heart Dance show after being stuck on tube
Heart Dance Breakfast host Toby Anstis was about an hour late for his show this morning after being stuck ‘on a freezing cold, powerless tube train in London’. Toby posted a series of tweets earlier, saying that his train had been at a standstill for 15 minutes with no announcements. TFL responded, thanking him for his patience and confirmed the delay was due to a signal failure...More >>
ontheradio.co.uk - 17.01.2023
Pussycat Doll Ashley Roberts joins new radio station Heart 00s
Ashley Roberts, who sold tens of millions of records worldwide in the noughties as a member of The Pussycat Dolls, is joining new station Heart 00s to host her first ever solo radio show. Heart 00s, which launched across the UK today at 12 noon, joins sister stations Heart 70s, Heart 80s, Heart 90s and Heart Dance on DAB Digital Radio, on Global Player on smart speakers and online, playing hits of the 00s...More >>
ontheradio.co.uk - 20.05.2022
RAJAR Q1 2020: London and national brands roundup
BBC Radio 2 has lost almost a million listeners in the last year, according to the Q1/2020 audience research from RAJAR. The reach of the UK’s biggest radio station fell from 15.356m at the start of 2019 to 14.362m over the first three months of this year. The two biggest commercial radio networks – Heart and Capital – both lost significant reach over the 12 months too. The Heart network lost 787,000 listeners to leave a reach of 7.737m, while Capital dropped 815,000 to 6.386m. When you add in the other Heart and Capital branded stations – 70s, 80s, 90s, Dance, Xtra and Xtra Reloaded – the Heart brand reaches 9.365m and the Capital brand 7.502m...More >>
radiotoday.co.uk - 14.05.2020
RAJAR Q4 2019: New record for digital radio listening
Digital listening share has increased by 11% to a new record of 58.5%, up from 52.6% in Q4 2018 in the latest figures for Q4 2019. They were boosted by the launch of new national commercial digital stations, and the growth of listening online via smart speakers in home and DAB listening in car. Overall digital listening grew by 43.4 million hours or 8% year on year. Listening via online and apps grew by 28.5 million hours (or by 30%) to now account for 12.5% of all listening and 21.5% of digital listening...More >>
radiotoday.co.uk - 06.02.2020
RAJAR Q4 2019: London and national brands round-up
Coverage of the general election helped 5 Live, Radio 4 and LBC each add half a million listeners across 2019. 5 Live is up from 4.9m to 5.4m in the Q4/2019 RAJAR listening figures, while Radio 4 has added a similar amount, rising from 10.4m a year ago to 10.9m now. LBC, including new digital station LBC News, posts a record high of 2.7m listeners (up more than half a million year on year), while talkRADIO is up more than 40% from 12 months ago to now have 433,000 listeners a week – another record high for the Wireless station...More >>
radiotoday.co.uk - 06.02.2020
Heart 90s to launch on national DAB digital radio
Global is transforming its Heart 90s playlist service into a full national radio station on DAB, with Kevin Hughes hosting breakfast. It’s the first of five new services all going national on DAB in the next week – as teased by Global over the last few days. Heart 90s will officially launch tomorrow at 6am – Thursday 29th August – with non-stop music from the 90s and joins Heart, Heart Dance and Heart 80s which all have live national breakfast shows from Leicester Square. Kevin Hughes currently hosts Saturday afternoons on Heart, and previously presented Drive on Heart South Wales...More >>
radiotoday.co.uk - 28.08.2019
Global to launch Heart Dance with Toby Anstis on Breakfast
Heart Dance, a new service from Global, is launching on DAB digital radio across the UK this Friday 21st June. The Club Classics formatted station will have former Heart presenters Toby Anstis on the breakfast show, and Lucy Horobin on afternoon drive. Lucy will also be presenting a weekend show every Saturday from 10am – 1pm. Heart Dance will play club classics from the likes of Basement Jaxx, Daft Punk, Ne-Yo, Ultra Naté, Fatboy Slim and Armand Van Helden.More >>
radiotoday.co.uk - 17.06.2019

Kerrang!
Bring Me The Horizon - Medicine

Hallam FM
Harry Styles - As It Was

21:14Black Legend - You See The Trouble With Me

20:44Paul Johnson - Get Get Down
Get older playlist