(Votes:47, Average:4.8)
Please share Your opinion and comments in the Facebook-comment box below the player! If the radio lags, or breaks, please send us a message on the Contact page! If the radio doesn't start at all, try to check the Troubleshooting page to find a solution! 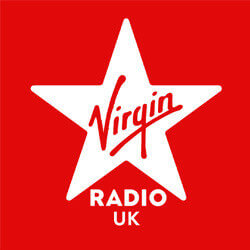 Listen online to the internet radio of Virgin Radio live here, on UK Radio Live!
Virgin Radio UK is one of Wireless Group’s numerous radio stations. Distributed only digitally, and has more than 1.5 million weekly listeners in the UK. Its playlist selects from the 80s to the present, so classic songs and new ones go through the day mainly from the pop and rock genres. Every day from 6am to 23pm presenters oversee the programme, and lead the mix of music and conversations, phone-ins. In the night-time, automated playlist serves the ceaseless music until morning.
Virgin Radio guarantees the good vibes for starting the weekday mornings from 6:30am to 10am with "The Chris Evans Breakfast Show with Sky" led by Chris Evans - which programme is shared with Virgin Radio's two sister stations.

Virgin Radio UK availability: Virgin Radio UK is only digitally distributed, so you can’t tune in your analogue radio, but many digital solutions are on the table, we recommend the online radio stream.

Virgin Radio UK 's slogan: “It’s all about the music.”

You can send e-mail to Virgin Radio UK from its official website here: http://virginradio.co.uk/contact

SMS: 87222 - Please start your message with “VIRGIN”
(Get informed by your network provider about SMS service costs)

Kerrang!
Weezer - Back To The Shack

KISSTORY
Missy Elliott - Get Ur Freak On

Cool FM
Afrojack& Icona Pop - We Got That Cool

Absolute Classic Rock
Nickelback - How You Remind Me

kmfm
Rita Ora - How To Be Lonely

Tay FM
Jonas Brothers - What A Man Gotta Do

Audio and Radio Industry Awards 2020 – Winners
The winners at the Audio and Radio Industry Awards 2020 have been revealed at an event at the London Palladium. The BBC took home 17 awards including Emma Barnett for Best Speech Presenter on BBC Radio 5 Live, Radio 1 Breakfast with Greg James for Best New Show, The 1Xtra Breakfast Show with Dotty forBest Music Breakfast Show and Elis James and John Robins for Funniest Show on BBC Radio 5 Live. Bauer Media radio brands were recognised on the night with Absolute Radio winning Gold for their coverage for Mental Health Awareness Week as well as their regional station Forth 1 who won Best Local Radio Show...More >>
radiotoday.co.uk - 04.03.2020
RAJAR Q4 2019: New record for digital radio listening
Digital listening share has increased by 11% to a new record of 58.5%, up from 52.6% in Q4 2018 in the latest figures for Q4 2019. They were boosted by the launch of new national commercial digital stations, and the growth of listening online via smart speakers in home and DAB listening in car. Overall digital listening grew by 43.4 million hours or 8% year on year. Listening via online and apps grew by 28.5 million hours (or by 30%) to now account for 12.5% of all listening and 21.5% of digital listening...More >>
radiotoday.co.uk - 06.02.2020
RAJAR Q4 2019: London and national brands round-up
Coverage of the general election helped 5 Live, Radio 4 and LBC each add half a million listeners across 2019. 5 Live is up from 4.9m to 5.4m in the Q4/2019 RAJAR listening figures, while Radio 4 has added a similar amount, rising from 10.4m a year ago to 10.9m now. LBC, including new digital station LBC News, posts a record high of 2.7m listeners (up more than half a million year on year), while talkRADIO is up more than 40% from 12 months ago to now have 433,000 listeners a week – another record high for the Wireless station...More >>
radiotoday.co.uk - 06.02.2020
Shortlist out for Audio and Radio Industry Awards 2020
The shortlist for this year’s Radio Academy’s ARIAs have been announced at an event at News UK headquarters in London. Presenters getting nominated include Chris Evans, Greg James, Stephen Nolan, Zoe Ball and Frank Skinner. Bauer leads the Commercial Radio nominees with just over two dozen, whilst we count that News UK has around 15. Global isn’t mentioned due to not submitting any entries once again this year. The rest of the shortlist includes newspapers, independent podcasts, independent producers and presenters, along with a few local radio stations including...More >>
radiotoday.co.uk - 15.01.2020
Former Radio City host Scott Hughes joins Virgin Radio Anthems
Former Radio City afternoon drive presenter Scott Hughes has joined Virgin Radio Anthems to host the weekday afternoon show. Scott took over the programme on November 25th and can be heard on the national digital station Monday to Friday from 2pm till 6pm slot and Saturday mornings from 10am. Talking about his new show, Scott Hughes told RadioToday: “I’m so happy to have joined such an amazing team of people, and to be on a station that plays such great music. I’m very excited about the future of the Virgin Radio UK stations in 2020.”...More >>
radiotoday.co.uk - 09.12.2019
RAJAR Q3 2019: London and national brands round-up
Zoe Ball has lost another 364,000 listeners to her BBC Radio 2 breakfast show in the latest radio listening figures from RAJAR. It means more than a million weekly listeners have switched off since she took over the breakfast show from Chris Evans in January. In the period 24th June to 15th September 2019 (Q3/2019), Radio 2 breakfast had a weekly reach of 7.902m – that’s down from 8.266m in Q2 and 9.047m in Q1.While Zoe is still the presenter of the UK’s biggest breakfast show, the figures are the lowest for the slot in a decade – since...More >>
radiotoday.co.uk - 24.10.2019
Detector Van advertising campaign starts for Chris Evans
A new advertising campaign for the Chris Evans Breakfast Show on Virgin Radio has kicked off. Chris, his wife Natasha, and his two sons – seven-year-old Eli and ten-year-old Noah – have filmed the new advert in the Virgin Radio ‘detector van’, styled on the old TV detector vans. In the TV ad, Chris Evans and his family are on a mission to retune the great British public’s radios. The 30-second spot which launched on Sky over the weekend sees Chris and his family drive the Virgin Radio detector van into a quiet residential...More >>
radiotoday.co.uk - 07.10.2019
David Lloyd releases new Radio Secrets book
A new insider’s guide to presenting and producing powerful content for broadcast and podcast has been written by David Lloyd. David has spent 35 years in radio, mostly in management, from LBC to Virgin, Century to Galaxy, Trent to Lincs FM, Free Radio to Gem 106 and BBC. He is now offering consultancy services and producing a weekly Radio Moments podcast and regular hour-long Conversations series with radio people who have made a difference. David tells RadioToday: “I wanted to write a new book which really fitted today’s"...More >>
radiotoday.co.uk - 27.08.2019
RAJAR Q2 2019: London and national brands round-up
Zoe Ball has lost more than three quarters of a million listeners to her BBC Radio 2 breakfast show, according to the latest audience research from RAJAR. The show’s reach is down 781,000 quarter-on-quarter to 8.266m for the three months survey period up to the 23rd June 2019. In Q1/19 she had 9.047m listeners; in Q2/2018 Chris Evans reached 9.038m. Radio 2’s audience at breakfast is now the lowest its been since Q3/2010, when Evans was fairly new in the job.More >>
radiotoday.co.uk - 01.08.2019