(Votes:23, Average:4.9)
If the online broadcast of XS Manchester 106.1 doesn't start, or lags, please contact us on the Contact page, or try to find the error on the Troubleshooting page. 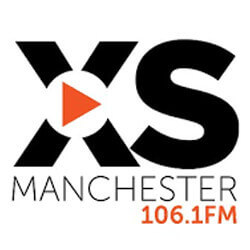 Listen live to the internet radio of XS Manchester, which launched in 2008 as 106.1 Rock Radio, and after a few name changes, finally in 2016 got its current name. The station is in the ownership of Communicorp UK Ltd.
The broadcaster operates as a local radio station serving primarily Manchester and North West England with locally related news, travel-traffic information, and weather updates. XS Manchester is home of the XS Football Social, so the radio is dedicated to be the number one correspondent of Manchester's sports community. XS Manchester’s playlist brings rock and indie rock music all day long without decade restrictions. The daytime’s schedule is filled with talkative shows with presenters through the day, starting with the Breakfast Show on weekdays from 6am to 10am commanded by Alex James, and on the weekends from 8am to 12am Shell Zenner takes the air.

Greater Manchester - 106.1 FMThe broadcast is available on the traditional analogue radio way in Greater Manchester, and also on the digital solutions like DAB Digital Radio, we recommend the online radio stream.
Your favourite radios
Heart Xmas
Wizzard - I Wish It Could Be Christmas Everyday

Heart FM
Yazz / The Plastic Population - The Only Way Is Up

Heart 80s
Yazz / The Plastic Population - The Only Way Is Up

Heart 90s
Backstreet Boys - All I Have To Give

Radio Caroline
Eddie & The Hot Rods - Beginning Of The End

U105
Madonna - Open Your Heart

Isle of Wight Radio
Bruno Mars - Just The Way You Are

Radio Essex
Katy Perry - The One That Got Away

45 Radio
Smokey Robinson & The Miracles - The Tears Of A Clown

XS Manchester to air new current affairs radio programme
Michelle Ackerley is joining XS Manchester to host a brand-new current affairs programme on Sundays at 7pm. The Manchester journalist will present the weekly show starting on Sunday 3rd October. XS Manchester’s Voice is funded by the Audio Content Fund and will be produced by MediaCityUK-based Audio Always...More >>
radiotoday.co.uk - 30.09.2021
Alex James moves from Hits Radio to XS Manchester
Hits Radio presenter Alex James is joining XS Manchester to host the breakfast show from July 6th. Alex has been on-air in the North West for 15 years, with stints at Key 103, Radio City, Real and Century. He’s also presented on Kerrang! Radio and hosted Bauer’s networked evening show In Demand. He says: “I can’t wait to get started on XS Manchester Breakfast – finding out what’s going on in our listeners’ lives, keeping an eye over everything that’s going on in and around Manchester and of course with loads of the best music to start the day in the world’s greatest city.” ...More >>
radiotoday.co.uk - 23.06.2020
RAJAR Q1 2020: Regional and local radio facts and figures
XS Manchester has doubled its listening hours year-on-year after the station was saved from closure. The Communicorp station now has 132,000 weekly reach (last year 94,000) and 1.28 million hours (last year 546k), giving it more total hours than Manchester’s heritage station Hits Radio. Also in the north west, Radio City Talk, which will close at the end of this month, leaves with 32,000 weekly listeners, down from 45,000 a year ago. Sticking with Bauer, local stations are mostly on the up. Of the 15 local services for Greatest Hits Radio in Scotland and England, eight are up and seven are down...More >>
radiotoday.co.uk - 14.05.2020
Ofcom rejects XS Manchester’s request of format change
XS Manchester’s request of format change to rebrand as Capital XTRA has been rejected by Ofcom. The request was made last October by Communicorp (now known as CCUK) to change from a rock and speech service for 35 – 64-year-olds, to an urban contemporary music service featuring music of an Afro-Caribbean origin and was subject to a public consultation. Ofcom originally said it was minded to approve the change, which would have resulted in Global’s Capital XTRA service being broadcast on 106.1FM in Manchester, closing XS. There were over 70 individuals and organisations who responded, with all but two opposed to the proposed changes...More >>
radiotoday.co.uk - 31.03.2020
Ofcom receives 51 objections to XS Manchester change
The feedback to Ofcom’s consultation about the proposal to change XS Manchester to Capital XTRA sees 51 objections and two in favour. Of the two welcoming the news, one is a local music company whilst the other simply comments “Since the last rebrand it’s been a dreadful station, put it out of its misery, sooner the better.” But over 50 people took the time to write to Ofcom to help block the move. Some of the comments include: ...More >>
radiotoday.co.uk - 23.02.2020
RAJAR Q4 2019: Regional and local radio facts and figures
The big stories from around the regions this quarter include Capital Scotland shedding 104,000 listeners, whilst Hits Radio and Greatest Hits Radio increased listeners in the North of England. Global brands - The majority of regional and local Capital stations are down – including Capital Scotland which falls from 513,000 to 409,000 weekly reach, Capital South Wales going from 213,000 to 180,000, Manchester down from 493,000 to 437,000 and Yorkshire down to its lowest figure of 849,000. Recently acquired and...More >>
radiotoday.co.uk - 06.02.2020
Opinion: RadioToday industry predictions for 2020
One thing is for sure – radio is changing at an incredible pace. Keeping up with emerging products and making full use of smart technology is key. But whilst the art of ‘input’ is changing, the ‘output’ has remained fairly static for many decades. Listeners can still hear a friendly voice on the radio at all hours of the day – the major difference is where the voice is located and when they were recorded. But let’s dig deeper down into the industry and see what 2020 might bring...More >>
radiotoday.co.uk - 01.01.2020
Fleur, Greg & James lined up for Tuning In North
Fleur East, Greg Burns and James Barr are the first speakers to be announced for Radiocentre’s Tuning In North event this September. The event will be the industry body’s biggest conference outside London and will bring together radio stations, agencies and clients for a full morning looking at the world of audio. Attendees will hear about the latest trends and opportunities in the evolving world of radio, be provided with insight into the latest in creativity and binaural sound and learn how advertisers can capitalise on the audio revolution.More >>
radiotoday.co.uk - 23.07.2019
RAJAR Q1 2019: Regional and local radio facts and figures
Whilst the national news is all about new radio stations and breakfast shows, the main headlines in the regions are about one of Bauer’s latest brands. The first results for Greatest Hits Radio in England show a mainly downward trend following the rebrand from City 2 stations last quarter.More >>
radiotoday.co.uk - 16.05.2019

21:37Foster The People - Pumped Up Kicks

00:00 - XS Non-Stop
Your favourite tunes to get you through the night
06:00 - XS Manchester Breakfast with Alex James
Alex James wakes you up with the XS Manchester Breakfast Show!
10:00 - Gareth Brooks
Gareth Brooks playing the biggest tunes for your workday
13:00 - Sophie Sveinsson
Sophie Sveinsson takes you through the afternoon with bags of tunes and Your XS
16:00 - Clint Boon
#ThatsGoodInnit Drive with Clint Boon
19:00 - Jim Salveson
Big tunes, Manc tunes and New tunes on the XS Evening Show!
23:00 - XS Chilled
60 minutes of non-stop chilled tunes