(Votes:5, Average:5)
Please share Your opinion and comments in the Facebook-comment box below the player! If the radio lags, or breaks, please send us a message on the Contact page! If the radio doesn't start at all, try to check the Troubleshooting page to find a solution! 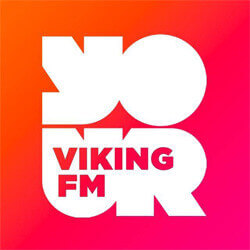 Listen online to the internet radio of Viking FM live here, on UK Radio Live!
Viking FM is on air from 1984, broadcasting in the territory of Humberside. Today, Viking FM has 168.000 weekly listeners, and is in the ownership of Bauer Radio Ltd., and member of the Planet Radio station fleet.
Viking FM is the territorial competent radio station of Bauer's Hits Radio Network in Humberside, so Viking FM supplies East Riding of Yorkshire and Northern Lincolnshire with locally relevant news, sport, travel-traffic and weather reports in daytime. In nightime national, international news and sport also fill up the hourly and half-hourly rotating info rations. Besides that, good-mooded talk-shows, phone-ins diversify the programme structure, which is filled mainly with pop music from the last 15 years. The schedule is partly networked programming from Bauer's Hits Radio Network, like "The UK Chart Show" on Sundays from 4pm to 7pm, which is Bauer's own, brand-new chart show led by Sarah-Jane Crawford, with the hottest 30 songs.
On weekdays, from 7am to 11am, Alex and Ellie set the air for a happy wake-up in Viking FM’s breakfast show.

You can select Viking FM’s sister station, Viking 2, which plays the greatest hits of the 60s, 70s, 80s, and 90s below the player.

Viking FM availability: You can tune in to Viking FM with your traditional analogue radio on 96.9 FM in East Riding of Yorkshire and in Northern Lincolnshire, and the digital solutions are also optional. We recommend the online radio stream.

SMS: 63101 - Please start your message with “VIKING”
(Get informed by your network provider about SMS service costs)

Magic FM
Eurythmics - There Must Be An Angel

Planet Rock
Through the Night

Heart 80s
Odyssey - Use It Up And Wear It Out

kmfm
99 Souls, Destiny's Child, Brandy - The Girl Is Mine

Sun FM
Becky Hill / Shift K3y - Better Off Without You

Nominations for the 2020 IRN Awards revealed
The nominations for the 2020 IRN Awards have been announced by Sky News presenter Kay Burley. There are 12 categories including the Student Journalist of the Year prize which is supported by the Broadcast Journalism Training Council. The awards event itself will take place at Sky Cinema in west London on Thursday 26th March 2020, also hosted by Kay. IRN Editor and Chair of Judges, Dave Terris said: This is a stellar list of nominations representing the gold standard in commercial radio news and sport...More >>
radiotoday.co.uk - 12.02.2020
Viking FM is moving out of Hull to join Hallam FM
Viking FM is moving its broadcast teams out of Hull to co-locate with Hallam FM in Sheffield. The station’s only remaining local show (once Drive goes networked in September), Breakfast with Alex Duffy and Ellie Brennan, will be broadcast from Sheffield starting on 2nd October. Bauer says: “The broadcast teams will move into our Sheffield studios, ensuring that they have access to the very best technology and resource and more vibrant creative environment.”More >>
radiotoday.co.uk - 12.08.2019
Bauer to network drivetime across 11 licences in North and Midlands
Bauer Media has announced plans to network Wes Butters and Gemma Atkinson across most of its big city stations in England, meaning 7 presenters will lose their daily drivetime show. From 2nd September, Wes will be on 4-7pm across Metro Radio, TFM, Rock FM, Radio City, Hallam FM, Radio Aire, Viking FM and the four Free Radio stations in the West Midlands – in addition to his current show on Hits Radio in Manchester and on DAB across the UK. Gemma will join the show after her maternity leave...More >>
radiotoday.co.uk - 05.08.2019
Bauer gains approval to network breakfast shows
Ofcom has granted Bauer a number of Format changes to allow all of its stations to network all but three hours each weekday rather than the previous seven. UK commercial radio stations have been allowed to submit Format changes since the Localness Guidelines were amended last year, but Bauer has only just taken the steps required to allow this. Bauer can now share all programmes, with the exception of a three-hour show on weekdays (which doesn’t have to be breakfast), in the approved areas already suggested by Ofcom.More >>
radiotoday.co.uk - 08.07.2019
Bauer design agency reveals Hits Radio national roll-out
One of Bauer’s design agencies has offered an insight into the future of the Hits Radio brand after writing about its recent work on its website. Thinkfarm, which works with Bauer designing and promoting some of its radio stations, created the brand identity and marketing campaign for Hits Radio. It appears to confirm that Hits Radio will replace regional brands to create one national station.More >>
radiotoday.co.uk - 11.04.2019
Opinion: UK commercial radio presenter numbers could drop by more than 250
With news that Global is to introduce networked breakfast shows and have just a handful of local drive shows across Capital, Heart and Smooth, RadioToday’s Stuart Clarkson has done the maths on what it means for presenter roles across commercial radio. Our exclusive figures show that presenter numbers could drop by more than 250 if both Global and Bauer take full advantage of the recent changes in localness guidelines from Ofcom.More >>
radiotoday.co.uk - 26.02.2019
Greatest Hits Radio launches with new line-up
Greatest Hits Radio has launched on FM, AM and DAB in a number of regions across England, with Mark Goodier joining the network for a daily programme. The former BBC Radio 1 and Smooth Radio presenter will present the mid-morning show, and joins a team of presenters already established on the network. Here’s how the schedule looks each weekday in England:...More >>
radiotoday.co.uk - 06.01.2019
Hits Radio to launch own UK Chart Show
Bauer is to broadcast its own chart show each Sunday afternoon following its decision to drop the Official Big Top 40 from Global. The UK Chart Show will broadcast every Sunday 4pm till 7pm with Sarah Jane Crawford across the Hits Radio Network from this Sunday, 6th January 2019. The programme will play “the hottest 30 tracks in the UK, airing what audiences are listening to, streaming, watching and downloading that week...More >>
radiotoday.co.uk - 04.01.2019
Here it is… Our radio industry predictions for 2019…
Once a year we pretend to be radio futurologists and predict the future of radio, with our annual radio industry predictions. The truth is, with deregulation and the continued movement of the top talent in the industry, anything could happen in 2019. So we’ve gone for some tongue-in-cheek predictions this year along with one or two which have a more than 50% chance of happening. Comments are open for a few days if you want to add yours! Happy New Year! ...More >>
radiotoday.co.uk - 01.01.2019