(Votes:29, Average:4.9)
Please share Your opinion and comments in the Facebook-comment box below the player! If the radio lags, or breaks, please send us a message on the Contact page! If the radio doesn't start at all, try to check the Troubleshooting page to find a solution! 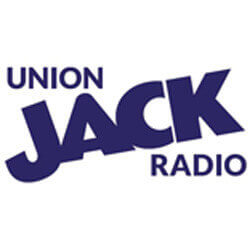 Listen to the internet radio of Union JACK live, which launched in 2016, and is in the ownership of JACK Media National Ltd.
The radio does not confute its name, so its mission is to air especially British originated content. Amongst these are the British music without time restrictions, but mainly the classics of British pop and rock are played. The broadcaster offers chance for new British bands to get on the playlist of Union JACK Radio. Furthermore to be really British, the comedy is also an integral part of the daily schedule. Even here the only restriction is to be British, so older comedies, and new ones are also aired from the bests of British humour.
The broadcaster launches the weekdays with "JACK's Wake Up Call" led by Jim Rosenthal and Trevor Marshall from 7am to 9am.


You can select Union JACK's two sister stations Dance and Rock below the player!

The broadcast is available on the digital solutions like DAB Digital Radio in the UK and without territorial restrictions by its online radio stream.
Your favourite radios
Capital FM
KC Lights feat. Leo Stannard - Cold Light

Smooth Radio
Labi Siffre - Something Inside (So Strong)

Absolute 80s
Phil Collins - Something Happened On The Way To Heaven

Geoff Lloyd returns to breakfast radio with the JACK network
Geoff Lloyd will cover breakfast at JACK during half-term next week as Jim Rosenthal and Trevor Marshall take a break. The former Absolute and Virgin Radio presenter has been presenting a few shows on the JACK network recently, including Geoff Lloyd’s Hometown Glory and Beatlejuice. The JACK breakfast show is heard on all six stations in the group, including JACK fm Oxfordshire and...More >>
radiotoday.co.uk - 19.10.2021
Union JACK Dance to celebrate British dance music
Union JACK Dance is starting a new radio show to celebrate the unique heritage and cultural influence of British dance music. Union JACK Dance Grooves with Jon Jules will air 7-9pm every Sunday from 3 October with a repeat on Wednesdays. Jules, former resident DJ at London’s Hippodrome, will venture through the music heritage, influences and inspiration behind the evolution of dance music and...More >>
radiotoday.co.uk - 28.09.2021
JACK fm introduces its first ever Drivetime radio show
Oxfordshire’s 106 JACK fm is to air its first regular Drivetime show since the station launched in 2007. Adam English, who currently hosts Drive on Union JACK, will have his show extended to Union JACK Dance, Union JACK Rock and JACK fm plus JACK2 Hits and JACK3 Chill. It means the show will be broadcast on six stations, all with their own playlists, matching the breakfast show...More >>
radiotoday.co.uk - 01.09.2021
JACK wants more indies to make radio programmes
Union JACK Dance has extended its Dancemasters show and is appealing for independent producers to get in touch with more programming ideas. The broadcast of Dancemasters marked the 20th anniversary of the radio show, which was at the forefront of the dance music industry in its heyday in the early-00s. Hosted by DJ and broadcaster James Blond, Dancemasters can be heard on Union JACK Dance every Friday night, 7-9pm, repeated at the same time every Saturday...More >>
radiotoday.co.uk - 08.06.2021
JACK starts new breakfast show across the group
A new breakfast show hosted by Jim Rosenthal and Trevor Marshall is set to launch across all JACK branded radio stations in the UK. Jim, who is also the voice of the station, will be on-air with established host Trevor from 7 till 9am from 10th May for JACK’s Wake Up Call. Adam English, who hosts The Full English on Union JACK radio, will move to 4-7pm every weekday on Union JACK radio, also from 10 May...More >>
radiotoday.co.uk - 04.05.2021
Dancemasters radio show returns with Union JACK Dance
Union JACK Dance is to broadcast a brand new series of Dancemasters featuring British DJ talent including Graeme Park, Allister Whitehead, Danny Rampling, Brandon Block, Judge Jules, Dave Pearce and more. The return marks the 20th anniversary of the show that was popular during its heyday in the early-00s. Dancemasters started life on BRMB in the West Midlands as a Friday and Saturday night show and lasted almost a decade, also broadcast on Capital...More >>
radiotoday.co.uk - 29.03.2021
The Beast returns to Union JACK for new radio quiz
Union JACK has brought back Mark “The Beast” Labbett to front a new and revamped twice-weekly quiz show. The Beast of all Pub Quizzes broadcasts live at 1pm every Tuesday and Thursday with the use of voice-activated technology using mobile phones. To join in, listeners simply need to download the Union JACK radio App for free and listen online of via DAB. Speaking of the show, Labbett said: “The Beast is back – and this time with The Beast of all Pub Quizzes! We had so much fun doing it before and this time is even better – if you think you can outwit the nation, then download the app, tune into Union JACK radio and come and have a go.”...More >>
radiotoday.co.uk - 01.12.2020
Union JACK radio and NextUp Comedy come together
A partnership between Union JACK and NextUp Comedy is delivering a daily dose of comedy to listeners each weekday afternoon. NextUp Comedy, widely billed as the Netflix of UK stand-up comedy, will provide the station with vintage and contemporary stand-up comedy from some of the country’s most acclaimed comedians. On Driving Comedy, listeners can expect to hear original stand-up content recorded at Jongleurs by comedians including Andy Parsons, Rhona Cameron, Omid Djalili, Marcus Brigstocke and Ed Byrne; alongside contemporary content created by NextUp Comedy and featuring new talent such as...More >>
radiotoday.co.uk - 05.10.2020
Union JACK looks for Britain’s Best Beer Garden
Union JACK has launched a competition to find Britain’s Best Beer Garden. The national DAB station is inviting listeners to nominate their top choice from anywhere in the country. The winning pub will become the host venue for a day of live broadcasts including its Full English Breakfast Show; and a live pub quiz hosted by Mark “The Beast” Labbett, who will also be a part of the live broadcast. Listeners will also have the chance to win themselves a year’s worth of drinks. Ahead of the competition launch, Union JACK radio asked listeners to share their thoughts on what constitutes a good beer garden, with these ideas used to develop the criteria on which entries will be judged. Have a listen to an example below...More >>
radiotoday.co.uk - 17.08.2020

00:00 - Union JACK Radio
Playing the Best of British - music, comedy and you lot!