(Votes:14, Average:4.8)
If the online broadcast of TFM doesn't start, or lags, please contact us on the Contact page, or try to find the error on the Troubleshooting page. 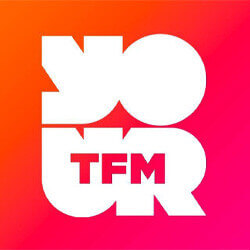 Listen to the internet radio of TFM live, which started its broadcasting in 1975 as a local radio station for the people of Teesside and its surroundings - County Durham and North Yorkshire. In 2013 TFM was merged with Metro Radio, from then they share their programming and serve together North East England. The station is in the ownership of Bauer Radio Ltd., member of the Planet Radio station fleet, and part of Bauer’s Hits Radio Network.
The broadcaster's schedule consisted of locally produced and networked programming. The networked programming comes from the Hits Radio Network headquarters in Manchester, like "The UK Chart Show" on Sundays from 4pm to 7pm, which is Bauer's own chart show led by Sarah-Jane Crawford with the hottest 30 songs.
The local programming brings locally relevant news, travel-traffic info, weather updates for the North East, and daily routine aligned programmes with presenters and popular music from the last 15 years.
The radio wakes in the mornings with the more than 20 years old, and multiple award winner "Steve & Karen’s Breakfast Show" presented by Steve Furnell and Karen Wight on weekdays from 6am to 10am.

XS Manchester 106.1
Arctic Monkeys - Why`d You Only Call Me When You`re High

Radio Essex
Harry Styles - As It Was

Radio services off-air after fire at a North Yorkshire transmitter site
Local and regional radio stations including Capital, Heart, TFM and BBC Radio Tees have lost their analogue FM services around North Yorkshire following a fire at the Bilsdale mast. National stations Radio 1, Radio 2, Radio 3, Radio 4 and Classic FM along with local DAB services on the MuxCo multiplexes are also suffering from reduced coverage in the area. Freeview services carried by the site are also off-air...More >>
radiotoday.co.uk - 10.08.2021
Metro Radio & TFM on the move in Newcastle
Metro & TFM are relocating their studios and offices to the Grade II listed Gainsborough House on Grey Street in Newcastle. The studios will be used for Steve and Karen’s weekday Breakfast Show whilst the offices will host commercial teams from both stations. Metro Radio Station Director, Dom Munnelly, said: “We’re so pleased to be moving the station to one of the most iconic streets in the UK. We pride ourselves on reflecting North East life in our output...More >>
radiotoday.co.uk - 26.04.2021
Bauer to network drivetime across 11 licences in North and Midlands
Bauer Media has announced plans to network Wes Butters and Gemma Atkinson across most of its big city stations in England, meaning 7 presenters will lose their daily drivetime show. From 2nd September, Wes will be on 4-7pm across Metro Radio, TFM, Rock FM, Radio City, Hallam FM, Radio Aire, Viking FM and the four Free Radio stations in the West Midlands – in addition to his current show on Hits Radio in Manchester and on DAB across the UK. Gemma will join the show after her maternity leave...More >>
radiotoday.co.uk - 05.08.2019
Bauer gains approval to network breakfast shows
Ofcom has granted Bauer a number of Format changes to allow all of its stations to network all but three hours each weekday rather than the previous seven. UK commercial radio stations have been allowed to submit Format changes since the Localness Guidelines were amended last year, but Bauer has only just taken the steps required to allow this. Bauer can now share all programmes, with the exception of a three-hour show on weekdays (which doesn’t have to be breakfast), in the approved areas already suggested by Ofcom.More >>
radiotoday.co.uk - 08.07.2019
Alan Robson’s Night Owls to end on Metro Radio and TFM
Alan Robson has announced his late night phone in, which he has hosted for almost 40 years, is coming to an end. He started hosting the show started on Metro Radio in 1983 and later extended to TFM in recent years, but will finish on Thursday 27th June 2019. Alan told listeners on Thursday evening, 13th June, and posted the news on social media. Alan said: “I’ve had an incredible career on Metro and I’m grateful to both them, and you the listeners, for sticking by me for so long.”More >>
radiotoday.co.uk - 13.06.2019
Bauer design agency reveals Hits Radio national roll-out
One of Bauer’s design agencies has offered an insight into the future of the Hits Radio brand after writing about its recent work on its website. Thinkfarm, which works with Bauer designing and promoting some of its radio stations, created the brand identity and marketing campaign for Hits Radio. It appears to confirm that Hits Radio will replace regional brands to create one national station.More >>
radiotoday.co.uk - 11.04.2019
Greatest Hits Radio launches with new line-up
Greatest Hits Radio has launched on FM, AM and DAB in a number of regions across England, with Mark Goodier joining the network for a daily programme. The former BBC Radio 1 and Smooth Radio presenter will present the mid-morning show, and joins a team of presenters already established on the network. Here’s how the schedule looks each weekday in England:...More >>
radiotoday.co.uk - 06.01.2019
Hits Radio to launch own UK Chart Show
Bauer is to broadcast its own chart show each Sunday afternoon following its decision to drop the Official Big Top 40 from Global. The UK Chart Show will broadcast every Sunday 4pm till 7pm with Sarah Jane Crawford across the Hits Radio Network from this Sunday, 6th January 2019. The programme will play “the hottest 30 tracks in the UK, airing what audiences are listening to, streaming, watching and downloading that week...More >>
radiotoday.co.uk - 04.01.2019