(Votes:13, Average:5)
Please share Your opinion and comments in the Facebook-comment box below the player! If the radio lags, or breaks, please send us a message on the Contact page! If the radio doesn't start at all, try to check the Troubleshooting page to find a solution! 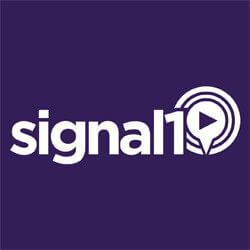 Listen online to the internet radio of Signal 1 live here, on UK Radio Live!
Signal 1 started in 1983 for broadcasting in the area of Staffordshire, and later, in 1989 expanded its broadcast’s area to Cheshire. Today, Signal 1 is in the ownership of Bauer Radio Ltd., and has 212.000 weekly listeners in the UK by its analogue and digital broadcasts.
Signal 1’s playlist offers the most popular hits of the last 2 decades, primarily concentrating to the present, and the schedule brings locally produced shows, phone-ins without any automated programming.
On weekdays, Signal 1’s Breakfast Show helps to rev up the listeners from 6am to 10am with Foxy and Matilda.
The local programming adds up to the half of the 24-hours from Monday to Saturday, and 4 hours on Sunday, while locally relevant news, traffic-travel info, and weather reports of Staffordshire and Cheshire flank the flow of pop hits. At other times, Bauer Radio's networked programming takes place.
On Sundays, from 4pm to 7pm, "The Total Access Top 40" chart show, led by Olivia Jones is broadcasted, with the hottest 40 songs.

Check below the player the sister stations of Signal 1, You can select Signal 2, Signal 107 (Wolverhampton's), Signal 80s, and the temporarily working Signal Christmas (available in December).

Signal 1 availability: Signal 1 can be followed with traditional analogue radio across Staffordshire and Cheshire, for the detailed FM allocation check the Frequencies section below and the Frequency Map! Digital solutions are also available, we recommend the online radio stream.

SMS: 87222 - Please start your message with “SIGNAL1”
(Get informed by your network provider about SMS service costs)

Magic FM
Belinda Carlisle - Heaven Is A Place On Earth

Kerrang!
Slash - Standing In The Sun

Heart Dance
The Tamperer - Feel It!

Gold Radio
Drifters - Save The Last Dance For Me

KISSTORY
Krept and Konan ft. Jeremih - Freak Of The Week

Magic at the Musicals
Moana - How Far I'll Go

Smooth Country
Shania Twain - Any Man Of Mine

Radio X
The Kooks - She Moves In Her Own Way

Bauer no longer has to sell Wolverhampton licence
The CMA has published additional findings in its investigation into Bauer owning the Wolverhampton licence for Signal 107. It now says there is no problem with Bauer keeping the service, having revised its view to provisionally conclude that no SLC has occurred or may be expected to occur in the supply of local radio advertising in the Wolverhampton area. With the SLC – or substantial lessening of competition – no longer being an issue, it means Bauer can keep 100% of the radio licences it bought 12 months ago...More >>
radiotoday.co.uk - 04.02.2020
Opinion: RadioToday industry predictions for 2020
One thing is for sure – radio is changing at an incredible pace. Keeping up with emerging products and making full use of smart technology is key. But whilst the art of ‘input’ is changing, the ‘output’ has remained fairly static for many decades. Listeners can still hear a friendly voice on the radio at all hours of the day – the major difference is where the voice is located and when they were recorded. But let’s dig deeper down into the industry and see what 2020 might bring...More >>
radiotoday.co.uk - 01.01.2020
Christmas specials planned at former Wireless stations
The stations formerly known as Wireless Local have created a number of special programmes to broadcast across their Christmas schedules. The group’s in-house team of producers & programmers have created shows with Chris Kamara, Robbie Williams, Tom Walker and Rick Astley that will feature on their schedules over the Christmas and New Year holiday. Robbie Williams, Rick Astley and ‘Christmas Kamara’ are on air on Christmas Day and Tom Walker presents his own one hour special on Boxing Day...More >>
radiotoday.co.uk - 11.12.2019
RAJAR Q3 2019: Regional and local radio facts and figures
The big stories from the regions are that Heart has increased its audience despite rolling out a national breakfast show, and Greatest Hits Radio stations are taking a beating under their new names. Global - For the Heart brand, overall, it has seen an increase in listeners since taking its breakfast show national. It now has 9.8m weekly reach compared with 9.7m last quarter and 9.6m last year. In the regions, seven Hearts went up including Scotland and North East England, nine went down including West Midlands and two stayed the same...More >>
radiotoday.co.uk - 24.10.2019
RAJAR Q1 2019: Regional and local radio facts and figures
Whilst the national news is all about new radio stations and breakfast shows, the main headlines in the regions are about one of Bauer’s latest brands. The first results for Greatest Hits Radio in England show a mainly downward trend following the rebrand from City 2 stations last quarter.More >>
radiotoday.co.uk - 16.05.2019
Matilda New replaces Emma Jones at Signal 1 Breakfast
Former Capital Birmingham breakfast co-host Matilda New has been hired by Signal 1 to co-host Breakfast. She will replace Emma Jones, who has moved on to focus on her television work and weekly Country Hits Radio programmes. Emma will continue to cover at the station during holidays. Matilda said: “I can’t wait to join Foxy on Signal 1 breakfast and look forward to being part of the Signal team!”.More >>
radiotoday.co.uk - 09.05.2019
Olivia Jones replaces Elliot Holman on Total Access
The Total Access evening show, which airs across local radio stations owned by Wireless, is getting a new host as Olivia Jones takes over from Elliot Holman... Wireless’ Group Programme Director for Local Radio, Terry Underhill told RadioToday: “Elliot has done a fantastic job building Total Access to record high audience levels and we are delighted that he’s accepted our offer to take over the mid-morning show on Signal 1. Olivia is the perfect person to take over Total Access. Her energy, enthusiasm and talent will shine in our newly refreshed network evening show.”...More >>
radiotoday.co.uk - 30.01.2019
Wireless creates its own weekly Top 40 show
Local radio stations owned by Wireless are to broadcast a new weekly Top 40 chart show each Sunday afternoon from 4pm till 7pm. The Total Access Top 40 will be hosted by Olivia Jones and available on nine stations – Signal 1, Signal 107, Wish FM, Pulse 1, Peak FM, Tower FM, Wire FM, Radio Wave and The Wave. The chart will be compiled from airplay, downloads and sales in the UK and sponsored by The Sun.More >>
radiotoday.co.uk - 20.12.2018

01:00 - Max Mallen
Max keeps you company through the night with The Best Music Mix, including High School Hits at 2am.
06:00 - Foxy & Matilda
Weekdays from 6am for Signal 1 Breakfast. With all the latest travel, news, weather.
10:00 - Elliot Holman
Elliot helps you through your workday with The Best Music Mix.
14:00 - The 2 O'Clock Takeover
Record your message on our mobile app and get your voice on-air.
15:00 - Dan Kelly
Driving you home with the latest travel and The Best Music Mix.
19:00 - Total Access: Olivia Jones
The home of the biggest stars and the freshest music.
22:00 - Spence Macdonald
The Late Show with Spence