(Votes:23, Average:4.7)
If the online broadcast of Rock FM doesn't start, or lags, please contact us on the Contact page, or try to find the error on the Troubleshooting page. 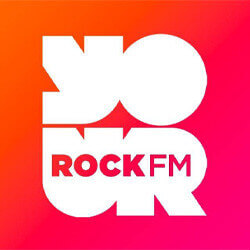 Listen to the internet radio of Rock FM live, which is owned by Bauer Radio Ltd., Lancashire related part of Bauer's Hits Radio Network, and member of the Planet Radio station fleet.
Rock FM broadcasts from Preston to the territory of Lancashire, and despite its name, Rock FM is not a rock genre specialized radio, but as the Hits Radio Network’s radios generally, mainly mainstream pop music fills up the playlist. The daily schedule is partly networked programming from Bauer's Hits Radio Network. Local news and weather reports keep the listeners updated, and good-tempered talk-shows with presenters keep the atmosphere cheerful in daytime besides the non-stop flowing pop hits from the last 15 years. The radio continuously runs competitions giving chance to the listeners to win money and various prizes by the Rock FM Cash Register.
The station launches the waves on weekdays with "The Rock FM Breakfast Show with Joel Ross" between 6am and 10am. The Saturday mornings are under the supervision of Fleur East from 9am to 12pm to pick up the speed for the weekend. On Sundays "The UK Chart Show" is broadcasted from 4pm to 7pm, which is Bauer's own, chart show led by Sarah-Jane Crawford, with the hottest 30 songs.

DJ On Tap
Cypress Hill - Insane in the Brain

Original 106
Coldplay - Hymn For The Weekend

Boom Radio
Shirley Bassey - As I Love You

45 Radio
Blancmange - Living on the Ceiling

Red Rose Radio name planned to return in Lancashire
Former Rock FM presenter Rob Charles is planning on using the Red Rose Radio name for a new radio station in central Lancashire. Rob said he wants to launch a new station on the small-scale DAB multiplex licence which has just been awarded to cover the Preston area. Red Rose Radio launched in 1982 and split into Red Rose Gold and Red Rose Rock FM in 1990, but Red Rose Gold became...More >>
radiotoday.co.uk - 16.05.2022
Presenter moves as Virgin Radio introduces summer schedule changes
Virgin Radio UK has a few programming changes across the network for the summer season, including the return of Virgin Radio Pride UK in June. As Sam Pinkham takes a break, Steve Denyer moves to early breakfast. Bam moves to evenings from 7-10pm on Monday to Thursday, and Olivia Jones joins the team from Rock FM to present the late show from 10pm...More >>
radiotoday.co.uk - 26.04.2022
Michelle Dignan to host BBC Radio Manchester Breakfast
BBC Radio 5 Live travel presenter Michelle Dignan is joining BBC Radio Manchester to presenter the breakfast show. Michelle, who has also worked for Bauer at various stations around the north of England, replaces Becky Want next month. In addition to doing voice-overs for the last 15 years, Michelle has co-hosted breakfast at Key 103 in Manchester, Rock FM in Lancashire and Hallam FM in Sheffield...More >>
radiotoday.co.uk - 22.09.2021
Olivia Jones to host afternoons on Hits Radio Pride
Olivia Jones will be extending her presenting duties on Hits Radio Pride by hosting weekday afternoons. Olivia currently hosts Sunday afternoons on the Bauer LGBTQ+ radio station, and also co-presents Rock FM Breakfast. She takes over from Paris Munro, who has been hosting weekday afternoons on Hits Radio Pride for the past six months...More >>
radiotoday.co.uk - 19.09.2021
Olivia Jones joins Rock FM to co-host Breakfast
Presenter Olivia Jones is to join Joel Ross as part of the Rock FM Breakfast Show from January. Olivia will replace current co-host Janine Marsh who has been on the show since 2016. She presented her last show on Friday (18th December). On joining the Rock FM Breakfast Show from January 4th, Olivia says: “I am beyond thrilled to be taking on a new radio challenge at the start of 2021 with an incredibly talented team at Rock FM. “Breakfast radio is one the most exciting jobs in the world and I look forward to spending each morning with our funny, caring and loyal listeners.”...More >>
radiotoday.co.uk - 21.12.2020
Joel Ross joins Bauer to co-host Rock FM Breakfast
Former Heart North West Breakfast host Joel Ross is moving to Rock FM to present the breakfast show with Janine Marsh. Janine currently hosts the show with her husband Steve Marsh, but this show will come to an end on Friday 6th December 2019 as Steve leaves the station and Janine takes time off to have a baby. A new show with Joel and Janine will start next year when Janine returns from maternity leave. Joel Ross, who has previously worked at Virgin, Key 103 and Radio 1, was most recently on Heart North West with Lorna Bancroft, before...More >>
radiotoday.co.uk - 22.11.2019
Bauer to network drivetime across 11 licences in North and Midlands
Bauer Media has announced plans to network Wes Butters and Gemma Atkinson across most of its big city stations in England, meaning 7 presenters will lose their daily drivetime show. From 2nd September, Wes will be on 4-7pm across Metro Radio, TFM, Rock FM, Radio City, Hallam FM, Radio Aire, Viking FM and the four Free Radio stations in the West Midlands – in addition to his current show on Hits Radio in Manchester and on DAB across the UK. Gemma will join the show after her maternity leave...More >>
radiotoday.co.uk - 05.08.2019
Bauer gains approval to network breakfast shows
Ofcom has granted Bauer a number of Format changes to allow all of its stations to network all but three hours each weekday rather than the previous seven. UK commercial radio stations have been allowed to submit Format changes since the Localness Guidelines were amended last year, but Bauer has only just taken the steps required to allow this. Bauer can now share all programmes, with the exception of a three-hour show on weekdays (which doesn’t have to be breakfast), in the approved areas already suggested by Ofcom.More >>
radiotoday.co.uk - 08.07.2019
Bauer design agency reveals Hits Radio national roll-out
One of Bauer’s design agencies has offered an insight into the future of the Hits Radio brand after writing about its recent work on its website. Thinkfarm, which works with Bauer designing and promoting some of its radio stations, created the brand identity and marketing campaign for Hits Radio. It appears to confirm that Hits Radio will replace regional brands to create one national station.More >>
radiotoday.co.uk - 11.04.2019

Austrian Rock Radio
Daughtry - Over You

Eska ROCK
Nirvana - Come As You Are

20:11David Guetta and John Newman - If You Really Love Me