(Votes:4, Average:4.5)
If the online broadcast of Pure Radio doesn't start, or lags, please contact us on the Contact page, or try to find the error on the Troubleshooting page. 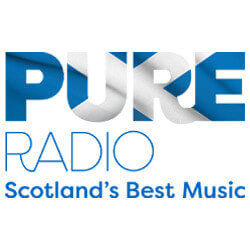 Listen online to the internet radio of Pure Radio, which launched in 2019 after the rebranding of the predecessor Discovery 102 radio in Glasgow. Pure Radio is in the ownership of DC Thomson Media, and operates as a commercial radio station, which aims to serve as Scotland's most original music, news and entertainment source. At the start the broadcast was available only on the digital ways, but not so long ago its broadcast was expanded with two FM frequencies available in an around Perth and Dundee. As a Scottish station, Pure focuses its news on Scotland, and on the local relevant events. The radio airs the best music from the last 40 years of various genres. Pure Radio Scotland launches the weekday mornings from 6am to 10am with the The Robin Galloway Breakfast Show.

Q Radio
Anastacia - One Day In Your Life

DJ On Tap
Manic Street Preachers - A Design for Life

Pure Radio Scotland switches to all Christmas music all day
Pure Radio is playing nothing but Christmas music till the big day itself. The station, with Robin Galloway in the mornings, officially launched Christmas on November 25th, dropping all regular playlists for a month of festive favourites...More >>
radiotoday.co.uk - 27.11.2022

21:26Kelly Clarkson - Underneath The Tree