(Votes:17, Average:5)
Please share Your opinion and comments in the Facebook-comment box below the player! If the radio lags, or breaks, please send us a message on the Contact page! If the radio doesn't start at all, try to check the Troubleshooting page to find a solution! 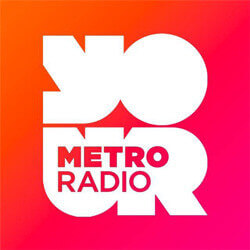 Listen to the internet radio of Metro Radio live, which launched in 1974 with the broadcasting area of North East England - Tyne and Wear, Durham, Northumberland, and as a local radio station with the commitment of supplying the people with locally relevant news, international popular music, and good-mooded, human-faced programmes. Metro Radio was merged with TFM in 2013, and since then they share their programming and the serving of the people of North East England. The station is in the ownership of Bauer Radio Ltd., member of the Planet Radio station fleet.
The schedule of Metro Radio built of local and networked programming. The local programming brings locally relevant news, travel-traffic information, and weather reports about North East England, alongside with good-mooded programmes with presenters, and popular music from the last 15 years.
The broadcaster is the source of "Steve & Karen’s Breakfast Show" which is one of the UK’s longest operating morning show as working for more than 17 years. The multiple award winner show is presented by Steve Furnell and Karen Wight on weekdays from 6am to 10am.
The networked programming aired from the Hits Radio Network headquarters in Manchester, and broadcasts among others "The UK Chart Show" on Sundays from 4pm to 7pm, which is Bauer's own chart show led by Sarah-Jane Crawford, with the hottest 30 songs.

Smooth Radio
Shania Twain - You're Still The One

Heart 80s
Madness - It Must Be Love

DJ On Tap
Beegees - For Whom The Bell Tolls

U105
Michael Bolton - How Can We Be Lovers

Nation Radio
Take That - Everything Changes

Boom Radio
The Honeycombs - Have I The Right

BluesMen Channel
Darcy Perry Band - Another Funeral for a Friend

JACKfm
You Me At Six - Lived A Lie

James Whale returns to the late show on talkRADIO
James Whale is heading back to the late show with talkRADIO. He last hosted the 10pm show during the first incarnation of Talk Radio in the 90s and has more recently been on evenings at the digital station. James Whale said: “Nearly 50 years ago I started my radio life with Metro Radio in Newcastle and because I had what they described as a ‘late night voice’ they put me on at 10 o’clock at night...More >>
radiotoday.co.uk - 07.06.2021
Metro Radio & TFM on the move in Newcastle
Metro & TFM are relocating their studios and offices to the Grade II listed Gainsborough House on Grey Street in Newcastle. The studios will be used for Steve and Karen’s weekday Breakfast Show whilst the offices will host commercial teams from both stations. Metro Radio Station Director, Dom Munnelly, said: “We’re so pleased to be moving the station to one of the most iconic streets in the UK. We pride ourselves on reflecting North East life in our output...More >>
radiotoday.co.uk - 26.04.2021
Pirate FM and Lincs FM to take Bauer’s chart show
Bauer’s Sunday afternoon chart countdown is to air on Pirate FM and Lincs FM from this weekend. The Hits Radio Network’s ‘UK Chart Show’ is hosted by Sarah Jane Crawford and can be heard across stations such as Metro Radio, Radio Clyde and Radio City. On Lincs FM, it replaces the locally made Top 30 with Joseph Begley, whilst at Pirate FM it provides an alternative to the current non-stop music. Joseph will continue to host his Saturday breakfast show on Lincs FM...More >>
radiotoday.co.uk - 11.02.2021
Audio and Radio Industry Awards 2020 – Winners
The winners at the Audio and Radio Industry Awards 2020 have been revealed at an event at the London Palladium. The BBC took home 17 awards including Emma Barnett for Best Speech Presenter on BBC Radio 5 Live, Radio 1 Breakfast with Greg James for Best New Show, The 1Xtra Breakfast Show with Dotty forBest Music Breakfast Show and Elis James and John Robins for Funniest Show on BBC Radio 5 Live. Bauer Media radio brands were recognised on the night with Absolute Radio winning Gold for their coverage for Mental Health Awareness Week as well as their regional station Forth 1 who won Best Local Radio Show...More >>
radiotoday.co.uk - 04.03.2020
Nominations for the 2020 IRN Awards revealed
The nominations for the 2020 IRN Awards have been announced by Sky News presenter Kay Burley. There are 12 categories including the Student Journalist of the Year prize which is supported by the Broadcast Journalism Training Council. The awards event itself will take place at Sky Cinema in west London on Thursday 26th March 2020, also hosted by Kay. IRN Editor and Chair of Judges, Dave Terris said: This is a stellar list of nominations representing the gold standard in commercial radio news and sport...More >>
radiotoday.co.uk - 12.02.2020
Shortlist out for Audio and Radio Industry Awards 2020
The shortlist for this year’s Radio Academy’s ARIAs have been announced at an event at News UK headquarters in London. Presenters getting nominated include Chris Evans, Greg James, Stephen Nolan, Zoe Ball and Frank Skinner. Bauer leads the Commercial Radio nominees with just over two dozen, whilst we count that News UK has around 15. Global isn’t mentioned due to not submitting any entries once again this year. The rest of the shortlist includes newspapers, independent podcasts, independent producers and presenters, along with a few local radio stations including...More >>
radiotoday.co.uk - 15.01.2020
Bauer to network drivetime across 11 licences in North and Midlands
Bauer Media has announced plans to network Wes Butters and Gemma Atkinson across most of its big city stations in England, meaning 7 presenters will lose their daily drivetime show. From 2nd September, Wes will be on 4-7pm across Metro Radio, TFM, Rock FM, Radio City, Hallam FM, Radio Aire, Viking FM and the four Free Radio stations in the West Midlands – in addition to his current show on Hits Radio in Manchester and on DAB across the UK. Gemma will join the show after her maternity leave...More >>
radiotoday.co.uk - 05.08.2019
Bauer gains approval to network breakfast shows
Ofcom has granted Bauer a number of Format changes to allow all of its stations to network all but three hours each weekday rather than the previous seven. UK commercial radio stations have been allowed to submit Format changes since the Localness Guidelines were amended last year, but Bauer has only just taken the steps required to allow this. Bauer can now share all programmes, with the exception of a three-hour show on weekdays (which doesn’t have to be breakfast), in the approved areas already suggested by Ofcom.More >>
radiotoday.co.uk - 08.07.2019
Alan Robson’s Night Owls to end on Metro Radio and TFM
Alan Robson has announced his late night phone in, which he has hosted for almost 40 years, is coming to an end. He started hosting the show started on Metro Radio in 1983 and later extended to TFM in recent years, but will finish on Thursday 27th June 2019. Alan told listeners on Thursday evening, 13th June, and posted the news on social media. Alan said: “I’ve had an incredible career on Metro and I’m grateful to both them, and you the listeners, for sticking by me for so long.”More >>
radiotoday.co.uk - 13.06.2019