(Votes:34, Average:4.6)
Please share Your opinion and comments in the Facebook-comment box below the player! If the radio lags, or breaks, please send us a message on the Contact page! If the radio doesn't start at all, try to check the Troubleshooting page to find a solution! 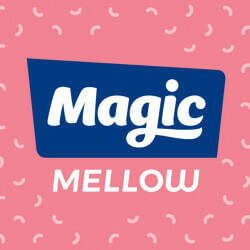 Listen online to the internet radio of Mellow Magic live, which was originally the parent station - Magic Radio’s night-time programme, but as it had become so popular in London, the broadcaster decided to launch an individual station with its musical style and name. The radio is in the ownership of Bauer Radio Ltd., and member of the Planet Radio station fleet.
Mellow Magic’s viewpoint in its playlist is to bring calm and peaceful mood throughout the day with slower dynamics, and with more melodies in pop and rock genres. The time scale of the selection is almost unlimited as pieces from the 60’s appear as well as through the century to the millennium.
The radio's morning slot is supervised by Fran Godfrey, who brings morning news, and soothing tunes on weekdays from 6am to 9am.

You can tune to the other Magic radios below the player, and Magic Radio, Magic Soul, Magic Chilled are also included as individual stations here, on UKRadioLive.

The broadcast is not available on the traditional analogue radio way, but You can listen to it by its online radio stream without territorial restrictions.
Your favourite radios
LBC Radio - LBC 97.3

Q Radio
Bruno Mars - Just The Way You Are

Cheesy FM
Betty Boo - Where Are You Baby?

Sun FM
Sugababes - Round Round

Radio Caroline
The Animals - The House Of The Rising Sun

Nation Radio
Culture Club - Do You Really Want To Hurt Me

3FM Isle of Man
Boyzone - Picture Of You

Bauer launches Magic 100% Christmas in August
Bauer Media has today launched pop-up station Magic 100% Christmas – four months before the big day. The station will be online only this year, with Bauer saying the service is needed to lift the spirits of the UK. Tony Moorey, Group Content Director, Magic Radio, told RadioToday: “At Magic Radio we are constantly evolving our offerings and launching innovative new shows and stations to ensure that we reflect our audience’s needs. “With listeners seeking cheer and fun during these challenging times and a strong understanding of how music and Christmas are interlinked, we knew that the next expansion of the Magic brand had to be around the joy of Christmas.” ...More >>
radiotoday.co.uk - 25.08.2020
Kat Shoob joins Magic for weekend evenings
Former Big Top 40 presenter Kat Shoob is joining Magic to host the Mellow Magic strand on weekend evenings. She’ll begin on the Bauer-owned station from this Sunday (1st March) in the 8pm to Midnight slot on both Saturdays and Sundays. The show will also be simulcast on digital station Mellow Magic. Kat co-hosted the commercial radio chart show for almost a decade until the end of 2018, when she also departed the weeknight slot on Heart. Prior to that she’d presented other network shows on Heart and also did evenings on Capital with Rich Clarke...More >>
radiotoday.co.uk - 28.02.2020
RAJAR Q4 2019: London and national brands round-up
Coverage of the general election helped 5 Live, Radio 4 and LBC each add half a million listeners across 2019. 5 Live is up from 4.9m to 5.4m in the Q4/2019 RAJAR listening figures, while Radio 4 has added a similar amount, rising from 10.4m a year ago to 10.9m now. LBC, including new digital station LBC News, posts a record high of 2.7m listeners (up more than half a million year on year), while talkRADIO is up more than 40% from 12 months ago to now have 433,000 listeners a week – another record high for the Wireless station...More >>
radiotoday.co.uk - 06.02.2020
RAJAR Q3 2019: London and national brands round-up
Zoe Ball has lost another 364,000 listeners to her BBC Radio 2 breakfast show in the latest radio listening figures from RAJAR. It means more than a million weekly listeners have switched off since she took over the breakfast show from Chris Evans in January. In the period 24th June to 15th September 2019 (Q3/2019), Radio 2 breakfast had a weekly reach of 7.902m – that’s down from 8.266m in Q2 and 9.047m in Q1.While Zoe is still the presenter of the UK’s biggest breakfast show, the figures are the lowest for the slot in a decade – since...More >>
radiotoday.co.uk - 24.10.2019
RAJAR Q1 2019 – Zoe & Chris plus national and London radio round-up
Chris Evans and Virgin Radio both reached over a million listeners in the first quarter of 2019. The digital station’s audience has almost trebled compared with the last period of 2018 thanks to the arrival of Evans from Radio 2. In Q1/2019 it posts a weekly reach of 1.3m and total hours of 7.765m. A year ago those figures were 427,000 and 1.632m. Last quarter they were 447,000 and 1.686m.More >>
radiotoday.co.uk - 16.05.2019

01:46Andy Williams - Can't Take My Eyes Off You
Get older songs