(Votes:94, Average:4.6)
Please share Your opinion and comments in the Facebook-comment box below the player! If the radio lags, or breaks, please send us a message on the Contact page! If the radio doesn't start at all, try to check the Troubleshooting page to find a solution! 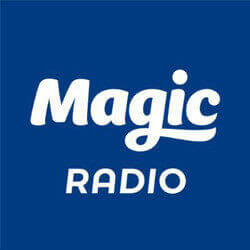 Listen online to the internet radio of Magic FM live here, on UK Radio Live!
Magic Radio is one of the most popular radio stations in the United Kingdom. The station is in the ownership of Bauer Radio Ltd, and member of the Planet Radio station fleet. More than 3.3 million weekly listeners choose the Magic for its indisputable commitment in enchanting the 80’s and 90’s greatest hits to an organic and live component of our daily life. The mainly nostalgic line-up isn’t just for today’s adults, but also offers interesting experience for the present’s youngsters about the origin of the current modern music trends. Additonally the radio fills up its musical line-up with some of the last two decades, and with some of the current popular hits.
The shows of the daily schedule are mostly supervised by famous presenters of the UK, such as the Magic Breakfast, which is led by Ronan Keating and Harriet Scott on weekdays from 6am to 10am.
The radio's message is beyond the 24 hours day’s time capacity, therefore 3 more digitally available sister stations, Mellow Magic, Magic Soul and Magic Chilled help to spread the magic of music in specialized styles, and this way they made-up the Magic Network.
In 2018's, 2019's and 2020's Christmas seasons, the station turned it's broadcast into a full Christmas radio format, with the slogan "100% Christmas". The broadcaster is the only major radio station in the UK which switches its main station to full Christmas format during the festive season.
The broadcast is available on the traditional analogue radio way on 105.4 FM in London, and on the digital ways too, we recommend the online radio stream.

You can tune to Magic FM’s sister stations below the player, and Mellow Magic, Magic Soul, Magic Chilled are also included as individual stations here, on UKRadioLive. Magic 100% Christmas launched on 25th August 2020, available below the player through this year!

Magic FM 's slogan: “More of the Songs You Love” and "100% Christmas" during Christmas Eve

SMS: 61054 - Please start your message with “MAGIC”
(Get informed by your network provider about SMS service costs)

Kerrang!
System Of A Down - Protect The Land

BBC Radio 4
You're Dead To Me

Mellow Magic
Lisa Stansfield - All Around The World

Absolute Radio
The Knack - My Sharona

Magic Soul
Shalamar - I Can Make You Feel Good

Joy Hits
Inna - I Need You For Christmas

Downtown Country
Hal Ketchum - Past The Point Of Rescue

Magic Fm
Abba - The Name Of The Game