(Votes:12, Average:4.8)
Please share Your opinion and comments in the Facebook-comment box below the player! If the radio lags, or breaks, please send us a message on the Contact page! If the radio doesn't start at all, try to check the Troubleshooting page to find a solution! 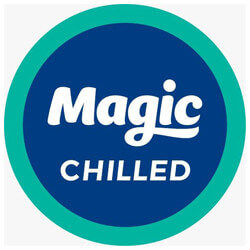 Listen online to the internet radio of Magic Chilled live here, on UK Radio Live!
Magic Chilled radio is one of Magic Radio sister stations, 242.000 weekly listeners choose it despite its only digital distribution.
The creation of Magic Radio sister stations aimed to be capable of satisfying various listeners desires, started from Magic Radio’s general pop style, through Mellow Magic’s ageless relaxing pop, and Magic Soul’s soul & motown to Magic Chilled’s chillout mooded pop style. Thus last but not least Magic Chilled completes Magic Radio Network’s dimension door to the magic of music, with the lightest melodic-lyric pieces of pop music from the last 30 years.
Magic Chilled doesn't have official breakfast show, but neither leaves the morning time spot empty, so Miri Green attests the chilling currents of the starting hours of the weekdays from 8am to 12am.
Magic Chilled is in the ownership of Bauer Radio Ltd., and member of Planet Radio station fleet.

You can tune to the other Magic radios below the player, and Magic Radio, Mellow Magic, Magic Soul are also included as individual stations here, on UKRadioLive.

Magic Chilled availability: Magic Chilled is not available on the traditional analogue radio way, but You can listen to its online radio stream.

SMS: 61054 - Please start your message with “MAGIC”
(Get informed by your network provider about SMS service costs)

Magic FM
The Real Thing - You To Me Are Everything

Mellow Magic
Sting - If I Ever Lose My Faith In You

Absolute 80s
Huey Lewis and The News - Stuck With You

JMA Radio
The Four Tops - Standing In The Shadows Of Love

Magic at the Musicals
The Last Five Years - Moving Too Fast

Bauer launches Magic 100% Christmas in August
Bauer Media has today launched pop-up station Magic 100% Christmas – four months before the big day. The station will be online only this year, with Bauer saying the service is needed to lift the spirits of the UK. Tony Moorey, Group Content Director, Magic Radio, told RadioToday: “At Magic Radio we are constantly evolving our offerings and launching innovative new shows and stations to ensure that we reflect our audience’s needs. “With listeners seeking cheer and fun during these challenging times and a strong understanding of how music and Christmas are interlinked, we knew that the next expansion of the Magic brand had to be around the joy of Christmas.” ...More >>
radiotoday.co.uk - 25.08.2020
RAJAR Q1 2020: London and national brands roundup
BBC Radio 2 has lost almost a million listeners in the last year, according to the Q1/2020 audience research from RAJAR. The reach of the UK’s biggest radio station fell from 15.356m at the start of 2019 to 14.362m over the first three months of this year. The two biggest commercial radio networks – Heart and Capital – both lost significant reach over the 12 months too. The Heart network lost 787,000 listeners to leave a reach of 7.737m, while Capital dropped 815,000 to 6.386m. When you add in the other Heart and Capital branded stations – 70s, 80s, 90s, Dance, Xtra and Xtra Reloaded – the Heart brand reaches 9.365m and the Capital brand 7.502m...More >>
radiotoday.co.uk - 14.05.2020
RAJAR Q3 2019: London and national brands round-up
Zoe Ball has lost another 364,000 listeners to her BBC Radio 2 breakfast show in the latest radio listening figures from RAJAR. It means more than a million weekly listeners have switched off since she took over the breakfast show from Chris Evans in January. In the period 24th June to 15th September 2019 (Q3/2019), Radio 2 breakfast had a weekly reach of 7.902m – that’s down from 8.266m in Q2 and 9.047m in Q1.While Zoe is still the presenter of the UK’s biggest breakfast show, the figures are the lowest for the slot in a decade – since...More >>
radiotoday.co.uk - 24.10.2019
RAJAR Q1 2019 – Zoe & Chris plus national and London radio round-up
Chris Evans and Virgin Radio both reached over a million listeners in the first quarter of 2019. The digital station’s audience has almost trebled compared with the last period of 2018 thanks to the arrival of Evans from Radio 2. In Q1/2019 it posts a weekly reach of 1.3m and total hours of 7.765m. A year ago those figures were 427,000 and 1.632m. Last quarter they were 447,000 and 1.686m.More >>
radiotoday.co.uk - 16.05.2019
RAJAR Q3 2018: Record share of 52.4% for digital radio
Digital listening share has remained above the important halfway mark and increased from 48.8% to 52.4% in the last 12 months. Total digital listening hours grew by 5.4% year on year, or 27.5 million hours. DAB listening in cars accounted for 11 million hours (or 40%) of all digital listening growth, while listening in home via online/Apps accounted for 13.5 million hours (or 49%) of all digital listening growth.More >>
radiotoday.co.uk - 25.10.2018
RAJAR Q2 2018: London and national brands update
Kiss has taken over from Capital as the biggest commercial radio station in London in the latest Q2/2018 RAJAR listening figures. Capital’s audience in the capital is down 10.8% year on year to 2.063m, while Kiss has had a great quarter, hitting 2.087m weekly listeners – 24,000 more than its rival. In third place is Magic (1.667m), which leapfrogs rival Heart this quarter (1.404m). LBC is in fifth on reach with 1.280m listeners in the capital (down 9.3% year on year).More >>
radiotoday.co.uk - 02.08.2018