(Votes:21, Average:4.9)
Please share Your opinion and comments in the Facebook-comment box below the player! If the radio lags, or breaks, please send us a message on the Contact page! If the radio doesn't start at all, try to check the Troubleshooting page to find a solution! 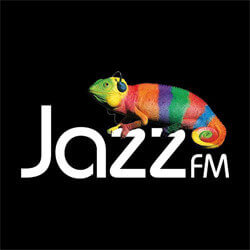 Listen online to the internet radio of Jazz FM live here, on UK Radio Live!
Jazz FM is the most popular jazz music, and blues oriented radio station in the UK with 583.000 weekly listeners. Jazz FM is in the ownership of Bauer Radio Ltd.
The Jazz FM’s playlist is controlled by the UK’s best jazz experts who keep up the colourful composition by selecting from the greatests of jazz songs, blues, and soul, and the new aspirants of these genres. Thus the classical jazz lovers’ demands are satisfied as well as those who are curious about the current waves of the low-key genres.
Jazz FM’s mission in promoting the deservedly loved genres of jazz, soul, and blues stepped forward in 2013, when Jazz FM established the annually held Jazz FM Awards.
Jazz FM has morning shows on all days of the week. Moreover double morning shows on weekdays, as warm-up, from 6am to 6:35am "Business Breakfast" led by award winner business journalist Michael Wilson, and his adjutants Jonny Hart and Nick Howard who glance on the world of business and finance, and between 6:35am and 10am "Jazz FM Breakfast with Nigel Williams" turns the vibrations by the music of the world's greatest artists. On Saturday and Sunday, from 6am to 10am the "Weekend Breakfast with Chris Gilvear" guarantees the jazzy start of the weekend.

Jazz FM availability: As digital radio station, Jazz FM can’t be tuned on the traditional analogue radio, but many of the digital solutions are optional. We recommend the online radio stream.

E-mail: info[kukac]jazzfm.com
You can send your e-mail to Jazz FM directly from the official Jazz FM website here: https://www.jazzfm.com/about/contact-us

Gem 106
The Calling - Wherever You Will Go

Hits Radio
Florence and The Machine - You Got The Love

Radio Essex
Timbaland / Katy Perry - If We Ever Meet Again

Clyde 1
House Of Pain - Jump Around

Absolute Radio
Stealers Wheel - Stuck In the Middle With You

Cool FM
Picture This - Everything Or Nothing

DJ On Tap
Maxi Priest - Close To You

Absolute 80s
Curiosity Killed The Cat - Down To Earth

Radio City 96.7
Florence and The Machine - You Got The Love

Audio and Radio Industry Awards 2020 – Winners
The winners at the Audio and Radio Industry Awards 2020 have been revealed at an event at the London Palladium. The BBC took home 17 awards including Emma Barnett for Best Speech Presenter on BBC Radio 5 Live, Radio 1 Breakfast with Greg James for Best New Show, The 1Xtra Breakfast Show with Dotty forBest Music Breakfast Show and Elis James and John Robins for Funniest Show on BBC Radio 5 Live. Bauer Media radio brands were recognised on the night with Absolute Radio winning Gold for their coverage for Mental Health Awareness Week as well as their regional station Forth 1 who won Best Local Radio Show...More >>
radiotoday.co.uk - 04.03.2020
RAJAR Q4 2019: London and national brands round-up
Coverage of the general election helped 5 Live, Radio 4 and LBC each add half a million listeners across 2019. 5 Live is up from 4.9m to 5.4m in the Q4/2019 RAJAR listening figures, while Radio 4 has added a similar amount, rising from 10.4m a year ago to 10.9m now. LBC, including new digital station LBC News, posts a record high of 2.7m listeners (up more than half a million year on year), while talkRADIO is up more than 40% from 12 months ago to now have 433,000 listeners a week – another record high for the Wireless station...More >>
radiotoday.co.uk - 06.02.2020
Shortlist out for Audio and Radio Industry Awards 2020
The shortlist for this year’s Radio Academy’s ARIAs have been announced at an event at News UK headquarters in London. Presenters getting nominated include Chris Evans, Greg James, Stephen Nolan, Zoe Ball and Frank Skinner. Bauer leads the Commercial Radio nominees with just over two dozen, whilst we count that News UK has around 15. Global isn’t mentioned due to not submitting any entries once again this year. The rest of the shortlist includes newspapers, independent podcasts, independent producers and presenters, along with a few local radio stations including...More >>
radiotoday.co.uk - 15.01.2020
Paul Jones returns to Jazz FM for Christmas show after 15 years
One of Jazz FM’s original presenters, Paul Jones, is returning to the station as part of its Christmas schedule. Festive programmes include specials from comedians Marcus Brigstocke and Rachel Parris, and on New Year’s Eve Omar Lye-Fook MBE and The Brand New Heavies will see in the Big Ben bongs alongside Jazz FM’s John Osborne and Sarah Ward with a commercial-free party soundtrack. Marcus Brigstocke will join Jazz FM for two special programmes. On Christmas Day from 1pm, he’ll be joined by comedian wife Rachel Parris, as they celebrate their first Christmas together as...More >>
radiotoday.co.uk - 18.12.2019
Winners announced for the 2019 Audio Production Awards
The winners have been revealed for the Audio Production Awards at a gala evening at the BFI Southbank, hosted by Tommy Sandhu. The special Gold Award went to the Mental Health Minute, coordinated by Radiocentre and produced by Somethin’ Else in 2018 and TBI Media in 2019. The Mental Health Minute was broadcast in May across hundreds of radio stations, including BBC Radio 1, Radio 2 and 5 Live, BBC Local Radio, as well as networks including Global, Bauer and Wireless and community stations. It reached a combined audience of over 40 million people, and featured His Royal Highness The Duke of Cambridge...More >>
radiotoday.co.uk - 29.11.2019
RAJAR Q3 2019: London and national brands round-up
Zoe Ball has lost another 364,000 listeners to her BBC Radio 2 breakfast show in the latest radio listening figures from RAJAR. It means more than a million weekly listeners have switched off since she took over the breakfast show from Chris Evans in January. In the period 24th June to 15th September 2019 (Q3/2019), Radio 2 breakfast had a weekly reach of 7.902m – that’s down from 8.266m in Q2 and 9.047m in Q1.While Zoe is still the presenter of the UK’s biggest breakfast show, the figures are the lowest for the slot in a decade – since...More >>
radiotoday.co.uk - 24.10.2019
Jazz FM and BBC Radio 3 share content in new partnership
BBC Radio 3 and BBC Sounds will broadcast Jazz FM content whilst Jazz FM is to share key recordings from BBC Radio 3. The partnership is in aid of the EFG London Jazz Festival bringing the two stations together. Shared content will appear on both BBC Radio 3 and BBC Sounds, and whilst the two stations have collaborated before with a digital pop-up BBC Music Jazz, this will be the first time BBC Radio 3 will be broadcasting content from Jazz FM on the network, with Jazz FM similarly sharing Radio 3 content from recorded concerts with...More >>
radiotoday.co.uk - 24.09.2019
Jazz FM announces PRS For Music Gold Award winner
British multi-instrumentalist and composer Jacob Collier has won the PRS For Music Gold Award as part of the Jazz FM Awards 2019. He’ll be given the award at the event, which is taking place this year on 30th April at Shoreditch Town Hall. Helen Mayhew – Jazz FM Presenter and Awards Judge said: “Jacob’s talents are extraordinary, he possesses a unique ear for harmony as heard not only in his multi layered YouTube songs, but also in his"...More >>
radiotoday.co.uk - 18.04.2019
Bauer boss calls for collaboration and respect in radio
Bauer Media UK’s CEO Paul Keenan has called for the whole radio industry to unite so that the sector can continue to prosper, saying there’s never been a better time in commercial radio. He was speaking in the opening session at this year’s RadioDays Europe event in Lausanne, Switzerland – where he also revealed that 40% of Bauer’s streaming of radio in the UK comes from smart speakers.More >>
radiotoday.co.uk - 01.04.2019

Jazz FM
Erykah Badu - Other Side of the Game

00:00 - The World's Greatest Jazz, Soul and Blues
Back to back jazz, blues and soul through the night.
06:00 - Business Breakfast
The Business Breakfast brings you all the latest from the world of business and finance.
06:35 - Jazz FM Breakfast with Nigel Williams
A bright and upbeat jazzy start to your day with the world’s greatest jazz, soul and blues from the world's greatest artists.
10:00 - Midmornings with Anne Frankenstein
Join Anne for a relaxed, informed, soulful and enlightening serving of jazz and soul to lift your morning off the page.
14:00 - Afternoon Drive with Jamie Crick in partnership with St Lucia Tourism Authority
Jamie Crick's programme is an enlightening listen for jazz lovers and curious newcomers alike, featuring music from legends to the latest releases.
18:00 - Jazz FM's Greatest with Mark Walker
An hour of the very best Jazz from the greatest to ever do it.
19:00 - Dinner Jazz with Mark Walker
The perfect show for unwinding after a long day featuring the greatest jazz of all time.
21:00 - The Big Easy with Lil' Koko
Guiding you through the most fascinating musical city on Earth - New Orleans.
22:00 - Late Night China Moses
A cool and sophisticated sound to weeknights including a spin of her track of the week.