(Votes:3, Average:5)
If the online broadcast of IBC Tamil Radio doesn't start, or lags, please contact us on the Contact page, or try to find the error on the Troubleshooting page. 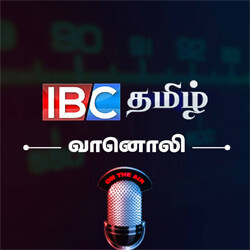 Listen online to the internet radio of IBC Tamil Radio, which launched in 1997 and operates from its London studios. IBC Tamil Radio is in the ownership of the International Broadcasting Corporation for Tamil. The station was the first Tamil radio, which became a 24/7 broadcaster in 2010 through DAB in London, and its mission is to be a trustworthy news and music source for the Sri Lankan Tamil diaspora in the UK and all over the world. The broadcaster's language is the Tamil, and also the music content sticks to the native Sri Lankan culture. The radio celebrated its 25th birthday in 2022.

Smooth Radio
Jeffrey Osborne - On The Wings Of Love

Heart Dance
Calvin Harris & Disciples - How Deep Is Your Love

Capital XTRA
Missy Elliott - Get Ur Freak On

Smooth Chill
Flitz&Suppe - About The Distance

DJ On Tap
Coldplay - A Sky Full Of Stars

Original 106
Mimi Webb - Ghost Of You

kmfm
The Weeknd - Take My Breath

House Party Radio
Advertise your business with us! whatsapp 07953 850 639 - @housepartyradio

3FM Isle of Man
Mike And The Mechanics - Over My Shoulder

SunKiss
Lewis Capaldi - Someone You Loved

Manx Radio
S Club 7 - Bring It All Back