(Votes:26, Average:4.8)
If the online broadcast of Hallam FM doesn't start, or lags, please contact us on the Contact page, or try to find the error on the Troubleshooting page. 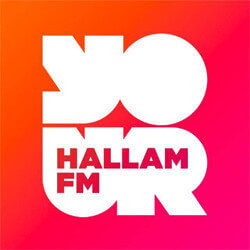 Now playing:
Ellie Goulding - Love Me Like You Do

Listen to the internet radio of Hallam FM live, which is in the ownership of Bauer Radio Ltd., member of the Planet Radio radio station fleet, and South Yorkshire’s territorial competent radio of Bauer's Hits Radio Network.
The radio was launched originally in 1974 as Radio Hallam, therefore the station maybe older than its listeners' majority, because its music playlist picks primarily from the last 15 years. The broadcaster offers partly local programmes, partly networked programmes from Bauer's Hits Radio Network. In its local programming, talk-shows, phone-ins, and the latest locally relevant news, traffic-travel and weather info packages keep the listeners informed about Yorkshire.
The mornings of Hallam FM are ignited by John Harrison alias "Big John", Liesl Soards and James Crookes alias "Producer James" on weekdays in “Big John @ Breakfast” from 6am to 10am. Big John is the leader presenter of the station's breakfast show for almost 2 decades, as presenting it since 2000. The Saturday morning shows are lead by Fleur East from 9am to 12pm.
On Sundays "The UK Chart Show" is broadcasted from 4pm to 7pm, which is Bauer's own chart show led by Sarah-Jane Crawford, with the hottest 30 songs.

DJ On Tap
Kelly Clarkson - Underneath The Tree

Smooth Country
Leann Rimes - How Do I Live

kmfm
Ariana Grande - Thank U, Next

Isle of Wight Radio
Lizzo - 2 Be Loved (Am I Ready)

97.3 Apple FM Taunton
Something For The Weekend with Greg Perkins

XS Manchester 106.1
The Courteeners - You Over Did It Doll

Michelle Dignan to host BBC Radio Manchester Breakfast
BBC Radio 5 Live travel presenter Michelle Dignan is joining BBC Radio Manchester to presenter the breakfast show. Michelle, who has also worked for Bauer at various stations around the north of England, replaces Becky Want next month. In addition to doing voice-overs for the last 15 years, Michelle has co-hosted breakfast at Key 103 in Manchester, Rock FM in Lancashire and Hallam FM in Sheffield...More >>
radiotoday.co.uk - 22.09.2021
RAJAR Q1 2020: London and national brands roundup
BBC Radio 2 has lost almost a million listeners in the last year, according to the Q1/2020 audience research from RAJAR. The reach of the UK’s biggest radio station fell from 15.356m at the start of 2019 to 14.362m over the first three months of this year. The two biggest commercial radio networks – Heart and Capital – both lost significant reach over the 12 months too. The Heart network lost 787,000 listeners to leave a reach of 7.737m, while Capital dropped 815,000 to 6.386m. When you add in the other Heart and Capital branded stations – 70s, 80s, 90s, Dance, Xtra and Xtra Reloaded – the Heart brand reaches 9.365m and the Capital brand 7.502m...More >>
radiotoday.co.uk - 14.05.2020
Shortlist out for Audio and Radio Industry Awards 2020
The shortlist for this year’s Radio Academy’s ARIAs have been announced at an event at News UK headquarters in London. Presenters getting nominated include Chris Evans, Greg James, Stephen Nolan, Zoe Ball and Frank Skinner. Bauer leads the Commercial Radio nominees with just over two dozen, whilst we count that News UK has around 15. Global isn’t mentioned due to not submitting any entries once again this year. The rest of the shortlist includes newspapers, independent podcasts, independent producers and presenters, along with a few local radio stations including...More >>
radiotoday.co.uk - 15.01.2020
Viking FM is moving out of Hull to join Hallam FM
Viking FM is moving its broadcast teams out of Hull to co-locate with Hallam FM in Sheffield. The station’s only remaining local show (once Drive goes networked in September), Breakfast with Alex Duffy and Ellie Brennan, will be broadcast from Sheffield starting on 2nd October. Bauer says: “The broadcast teams will move into our Sheffield studios, ensuring that they have access to the very best technology and resource and more vibrant creative environment.”More >>
radiotoday.co.uk - 12.08.2019
Bauer to network drivetime across 11 licences in North and Midlands
Bauer Media has announced plans to network Wes Butters and Gemma Atkinson across most of its big city stations in England, meaning 7 presenters will lose their daily drivetime show. From 2nd September, Wes will be on 4-7pm across Metro Radio, TFM, Rock FM, Radio City, Hallam FM, Radio Aire, Viking FM and the four Free Radio stations in the West Midlands – in addition to his current show on Hits Radio in Manchester and on DAB across the UK. Gemma will join the show after her maternity leave...More >>
radiotoday.co.uk - 05.08.2019
Bauer gains approval to network breakfast shows
Ofcom has granted Bauer a number of Format changes to allow all of its stations to network all but three hours each weekday rather than the previous seven. UK commercial radio stations have been allowed to submit Format changes since the Localness Guidelines were amended last year, but Bauer has only just taken the steps required to allow this. Bauer can now share all programmes, with the exception of a three-hour show on weekdays (which doesn’t have to be breakfast), in the approved areas already suggested by Ofcom.More >>
radiotoday.co.uk - 08.07.2019
Bauer design agency reveals Hits Radio national roll-out
One of Bauer’s design agencies has offered an insight into the future of the Hits Radio brand after writing about its recent work on its website. Thinkfarm, which works with Bauer designing and promoting some of its radio stations, created the brand identity and marketing campaign for Hits Radio. It appears to confirm that Hits Radio will replace regional brands to create one national station.More >>
radiotoday.co.uk - 11.04.2019
Opinion: UK commercial radio presenter numbers could drop by more than 250
With news that Global is to introduce networked breakfast shows and have just a handful of local drive shows across Capital, Heart and Smooth, RadioToday’s Stuart Clarkson has done the maths on what it means for presenter roles across commercial radio. Our exclusive figures show that presenter numbers could drop by more than 250 if both Global and Bauer take full advantage of the recent changes in localness guidelines from Ofcom.More >>
radiotoday.co.uk - 26.02.2019
Greatest Hits Radio launches with new line-up
Greatest Hits Radio has launched on FM, AM and DAB in a number of regions across England, with Mark Goodier joining the network for a daily programme. The former BBC Radio 1 and Smooth Radio presenter will present the mid-morning show, and joins a team of presenters already established on the network. Here’s how the schedule looks each weekday in England:...More >>
radiotoday.co.uk - 06.01.2019

09:55One Republic - I Ain't Worried
Get older playlist