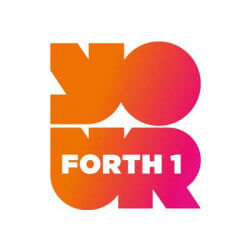 Listen online to the internet radio of Forth One live here, on UK Radio Live!
Forth 1 radio is owned by Bauer Radio Ltd., part of Bauer's Hits Radio Network, and member of the Planet Radio group. The station is located in Edinburgh and broadcasts to Edinburgh, the Lothians, Fife and Falkirk with local programming on FM. The networked programming part comes from Bauer's Hits Radio Network.
Forth 1 has 300.000 weekly listeners with pop music starting from the millennium, but concentrating primarily on the current hits.
As Scottish radio, Forth 1’s daytime news bulletins include news about Scotland, and Scottish related sports, besides the travel-traffic and weather reports.
For making the early hours refreshing, Forth 1’s morning show, the “Boogie in the Morning” with Arlene Stuart and Martyn Ewart starts the day from Monday to Friday between 6am and 10am, on Saturday Grant Thomson leads the waves from 6am to 9am, while the Sundays are in Gavin Pearson’s command between 6am and 9am. On Sundays "The UK Chart Show" is broadcasted from 4pm to 7pm, which is Bauer's own, brand-new chart show led by Sarah-Jane Crawford, with the hottest 30 songs.

Forth 1's greatest hits specialized sister station, Forth 2 can be selected below the player.

Forth 1 availability: You can tune in to Forth One with your traditional analogue radio - For the detailed FM allocation check the Frequencies section below and the Frequency Map. The digital solutions are also available to listen in, so you can follow Forth One's online radio stream without territorial restrictions.

SMS: 64100 - Please start your message with “STUDIO”
(Get informed by your network provider about SMS service costs)

Virgin Radio UK
Oasis - Half the World Away

Mellow Magic
Simon and Garfunkel - The Sound Of Silence

Heart 90s
Mike & The Mechanics - Over My Shoulder

Magic at the Musicals
Company - Getting Married Today

Absolute 80s
Bonnie Tyler - A Total Eclipse Of The Heart

Audio and Radio Industry Awards 2020 – Winners
The winners at the Audio and Radio Industry Awards 2020 have been revealed at an event at the London Palladium. The BBC took home 17 awards including Emma Barnett for Best Speech Presenter on BBC Radio 5 Live, Radio 1 Breakfast with Greg James for Best New Show, The 1Xtra Breakfast Show with Dotty forBest Music Breakfast Show and Elis James and John Robins for Funniest Show on BBC Radio 5 Live. Bauer Media radio brands were recognised on the night with Absolute Radio winning Gold for their coverage for Mental Health Awareness Week as well as their regional station Forth 1 who won Best Local Radio Show...More >>
radiotoday.co.uk - 04.03.2020
Nominations for the 2020 IRN Awards revealed
The nominations for the 2020 IRN Awards have been announced by Sky News presenter Kay Burley. There are 12 categories including the Student Journalist of the Year prize which is supported by the Broadcast Journalism Training Council. The awards event itself will take place at Sky Cinema in west London on Thursday 26th March 2020, also hosted by Kay. IRN Editor and Chair of Judges, Dave Terris said: This is a stellar list of nominations representing the gold standard in commercial radio news and sport...More >>
radiotoday.co.uk - 12.02.2020
Shortlist out for Audio and Radio Industry Awards 2020
The shortlist for this year’s Radio Academy’s ARIAs have been announced at an event at News UK headquarters in London. Presenters getting nominated include Chris Evans, Greg James, Stephen Nolan, Zoe Ball and Frank Skinner. Bauer leads the Commercial Radio nominees with just over two dozen, whilst we count that News UK has around 15. Global isn’t mentioned due to not submitting any entries once again this year. The rest of the shortlist includes newspapers, independent podcasts, independent producers and presenters, along with a few local radio stations including...More >>
radiotoday.co.uk - 15.01.2020
Garry Spence to leave Capital Scotland for Clyde 1
Capital Scotland drivetime presenter Garry Spence is leaving the station after more than a decade to join commercial rival Clyde 1. Garry has been on drive on the Capital Scotland frequencies since the station rebranded from Xfm to Galaxy in November 2008. He’d previously been on Xfm Scotland’s weekend schedule, and had 3 years at Vibe in East Anglia after starting his career at MFR in his hometown of Inverness. Bauer says Garry will take over Clyde 1’s 4-6pm Home Run show from early 2020. He’s currently the only...More >>
radiotoday.co.uk - 08.08.2019
Meg McHugh to Chill on Hits Radio Scotland Network
Northsound Radio presenter Meg McHugh is to host the Hits Chilled show across the Hits Radio Network in Scotland. From Sunday 4th August, Meg will take over the Hits Chilled segment every Sunday to Thursday from 10pm to 1am across Clyde 1, Forth 1, Tay FM, Northsound 1, MFR, West FM and Radio Borders, replacing Ryan Borthwick. Joining the station in 2017, Meg began her career as a travel reporter on Northsound before covering a variety of shows across the station.More >>
radiotoday.co.uk - 03.07.2019
Bauer design agency reveals Hits Radio national roll-out
One of Bauer’s design agencies has offered an insight into the future of the Hits Radio brand after writing about its recent work on its website. Thinkfarm, which works with Bauer designing and promoting some of its radio stations, created the brand identity and marketing campaign for Hits Radio. It appears to confirm that Hits Radio will replace regional brands to create one national station.More >>
radiotoday.co.uk - 11.04.2019
Hits Radio to launch own UK Chart Show
Bauer is to broadcast its own chart show each Sunday afternoon following its decision to drop the Official Big Top 40 from Global. The UK Chart Show will broadcast every Sunday 4pm till 7pm with Sarah Jane Crawford across the Hits Radio Network from this Sunday, 6th January 2019. The programme will play “the hottest 30 tracks in the UK, airing what audiences are listening to, streaming, watching and downloading that week...More >>
radiotoday.co.uk - 04.01.2019