(Votes:37, Average:4.7)
If the online broadcast of Cool FM doesn't start, or lags, please contact us on the Contact page, or try to find the error on the Troubleshooting page. 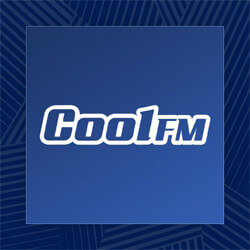 Listen to the internet radio of Cool FM live, which launched in 1990 as sister station of Downtown Radio, located in Northern Ireland, and is in the ownership of Bauer Radio Ltd., member of the Planet Radio station fleet.
Cool FM is the biggest radio station in Northern Ireland, its target age group is the 25-44, so the station's playlist is filled with the most popular music of the last 20 years, and with some of the 80s and 90s. Besides the music, mainly Northern Ireland related news, travel-traffic info and weather reports are included in the daily schedule.
The mornings of Northern Ireland are set in motion by the breakfast team of the radio, so Paulo Ross, Pete Snodden and Rebecca McKinney supervise the freshness of the starting waves of the day on weekdays from 6am to 10am.

Northern Ireland - 97.4 FMThe broadcast is available on the traditional analogue radio way on 97.4 FM in Northern Ireland, and also on the digital solutions like DAB Digital Radio, we recommend the online radio stream.
Your favourite radios
Heart Xmas
Wizzard - I Wish It Could Be Christmas Everyday

Gold Radio
Beach Boys - I Get Around

Heart 80s
Bob Marley - Could You Be Loved

Radio X
Paramore - This Is Why

Radio Caroline
Sloan - Dream It All Over Again

Capital XTRA Reloaded
Alicia Keys - If I Ain`t Got You

3FM Isle of Man
Billy Ocean - Get Outta My Dreams Get Into...

BluesMen Channel
Black Top - She Really Got Me Going

Christmas FM
I Want A Hippopotamus For Christmas - Gayla Peevey

SunKiss
Joy Crookes - When You Were Mine

45 Radio
Swing Out Sister - Am I The Same Girl

Cool Workout spin-off radio station launched by Cool FM
Cool FM is launching an online radio service for anyone taking part in this year’s Deep RiverRock Belfast City Marathon. “Cool Workout” will be running in conjunction with the event and is the first spinoff station to be launched by Cool FM in its 30-year history. David Tighe, Managing Director of Bauer Media/Cool FM said: “Our pop-up station brings a new dimension to our partnership with...More >>
radiotoday.co.uk - 19.08.2021
New weekend schedule at Cool FM as Andy Baird leaves
In his place, a range of new presenters and programmes as the Bauer service introduces a new ‘Spring schedule’. There are new slots for Melissa Riddell, Katharine Walker, DJ Hix, and Owen Beers. Fashion blogger Melissa Riddell will take over the weekend breakfast slot (6-10am). Melissa started her time at Cool FM in 2017 through the ‘Cool Choices’ programme – a scheme designed to offer work experience in the media industry to young people aged 16 to 24.More >>
radiotoday.co.uk - 24.01.2021
Winners announced at Irish radio awards event
Five radio stations in Northern Ireland picked up awards at the All-Ireland radio awards, the IMROs, last Friday. BBC Radio Ulster, BBC Radio Foyle, Q Radio and Cool FM/Downtown were recognised in various categories. Broadcaster Stephen Nolan won Best Interactive Speech Programme whilst John Toal got the Specialist Music Broadcaster of the Year award. Q Radio’s Connor Brennan won Gold for Newcomer of the Year whilst Cool FM/Downtown Radio’s Sarah McKinley won Silver...More >>
radiotoday.co.uk - 06.10.2020
RAJAR Q1 2020: Regional and local radio facts and figures
XS Manchester has doubled its listening hours year-on-year after the station was saved from closure. The Communicorp station now has 132,000 weekly reach (last year 94,000) and 1.28 million hours (last year 546k), giving it more total hours than Manchester’s heritage station Hits Radio. Also in the north west, Radio City Talk, which will close at the end of this month, leaves with 32,000 weekly listeners, down from 45,000 a year ago. Sticking with Bauer, local stations are mostly on the up. Of the 15 local services for Greatest Hits Radio in Scotland and England, eight are up and seven are down...More >>
radiotoday.co.uk - 14.05.2020
New logo and transmitter for Downtown Radio
Downtown Radio is marking its 44th year on the air with the launch of a brand-new FM transmitter and new visual logo. The new frequency will broadcast from Carnmoney Hill on 103.4FM and will complement the stations existing FM network across Northern Ireland. Downtown can now be heard on 96.4FM, 96.6FM, 102.3FM, 102.4FM, 103.1FM, 103.4FM and 1026AM plus DAB. Also, former Cool FM DJ Glen Pavis is joining Gary Myles on the Downtown Breakfast Show whilst Owen Larkin is crossing over from Q Radio for a new afternoon programme...More >>
radiotoday.co.uk - 16.03.2020
Nominations for the 2020 IRN Awards revealed
The nominations for the 2020 IRN Awards have been announced by Sky News presenter Kay Burley. There are 12 categories including the Student Journalist of the Year prize which is supported by the Broadcast Journalism Training Council. The awards event itself will take place at Sky Cinema in west London on Thursday 26th March 2020, also hosted by Kay. IRN Editor and Chair of Judges, Dave Terris said: This is a stellar list of nominations representing the gold standard in commercial radio news and sport...More >>
radiotoday.co.uk - 12.02.2020
Downtown Radio moves country music off FM
A new evening show is launching on Downtown Radio’s FM frequencies next month with Kirstie McMurray. At the moment, Big T hosts Classic Country on both Downtown Radio and Downtown Country. But starting in March, former Cool FM and Downtown Radio breakfast presenter Kirstie McMurray, who currently hosts breakfast on Downtown Country, will be on-air 7pm till 10pm on Downtown Radio’s FM service...More >>
radiotoday.co.uk - 03.02.2020
Cool FM signs two year deal with Ulster Rugby
Cool FM has teamed up with Ulster Rugby in an exclusive two-year deal, extending to sister stations Downtown Radio and Downtown Country. The partnership will see Cool FM deliver new match day initiatives at the home games across the year, with content online, on air, and across news programming.More >>
radiotoday.co.uk - 27.07.2018

12:15Darlene Love - All Alone On Christmas

11:37Mimi Webb - Ghost Of You
Get older playlist