(Votes:20, Average:4.5)
Please share Your opinion and comments in the Facebook-comment box below the player! If the radio lags, or breaks, please send us a message on the Contact page! If the radio doesn't start at all, try to check the Troubleshooting page to find a solution! 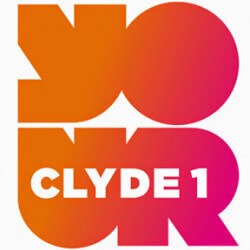 Listen online to the internet radio of Clyde 1 live here, on UK Radio Live!
Clyde 1 radio started in 31 december 1973 as regional broadcaster in Scotland. On the analogue way, the broadcast is restricted to Glasgow and West Central Scotland, but on the digital ways there are no area restrictions in its availability, so the weekly listeners number is 628.000 in the UK. Clyde radio is in the ownership of Bauer Radio Ltd., part of Bauer's Hits Radio Network, and member of the Planet Radio group.
Clyde 1’s priority is to fill up the whole day with the last 15 years’ biggest hits, primarily from the more dynamic music-line for keeping up the good mood and the increased energy level in our daily routine. The obligatory news bulletins with the important, locally relevant news with weather reports, and travel-traffic information remind the listeners about the world outside the music. Clyde 1's daily schedule is partly filled with networked programming from Manchester, the headquarters of Bauer’s Hits Radio Network.
On Sundays "The UK Chart Show" is broadcasted from 4pm to 7pm, which is Bauer's own, brand-new chart show led by Sarah-Jane Crawford, with the hottest 30 songs.
Clyde 1’s morning show is led by George Bowie for more than 20 years, the “Bowie at Breakfast” takes the warm-up procedure of Glasgow and the West on weekdays from 6am to 10am.

Below the player You can select and listen to Clyde 2, which is Clyde 1's greatest hits specialized sister station.

Clyde 1 availability: You can follow Clyde radio on the traditional analogue radio way - For the detailed FM/AM allocation, check the Frequencies section below, and the Frequency Map! Moreover the digital solutions are also available, we recommend the online radio stream.

SMS: 61025 - Please start your message with “Clyde 1”
(Get informed by your network provider about SMS service costs)

Heart FM
Lewis Capaldi - Hold Me While You Wait

BBC Radio 4
The Passion in Plants

Capital XTRA
Jayla Darden - Onto Something

Planet Rock
Lenny Kravitz - Are You Gonna Go My Way

Magic Soul
Junior Walker and The All Stars - Road Runner

Magic at the Musicals
Come From Away - Screech In

Absolute Classic Rock
Kings Of Leon - Back Down South

DJ On Tap
Mandy Smith - Got To Be Certain

Radio X
Mystery Jets - Wrong Side Of The Tracks

Nicola Sturgeon radio special for Bauer Scotland
Bauer has secured a one-hour special with First Minister Nicola Sturgeon for broadcast across the Hits Radio and Greatest Hits networks in Scotland. The First Minister will be joining Ewen Cameron from 9am to 10am on Friday 3rd April 2020 to answer questions from listeners and to respond to their most pressing issues and concerns about COVID 19 as well as providing the latest updates on the Scottish Government’s response. The ‘Scotland Cares’ campaign will also be under discussion as the First Minister highlights the initiative which was launched this week to encourage people to volunteer to help their communities, public services and voluntary organisations during the pandemic...More >>
radiotoday.co.uk - 02.04.2020
Nominations for the 2020 IRN Awards revealed
The nominations for the 2020 IRN Awards have been announced by Sky News presenter Kay Burley. There are 12 categories including the Student Journalist of the Year prize which is supported by the Broadcast Journalism Training Council. The awards event itself will take place at Sky Cinema in west London on Thursday 26th March 2020, also hosted by Kay. IRN Editor and Chair of Judges, Dave Terris said: This is a stellar list of nominations representing the gold standard in commercial radio news and sport...More >>
radiotoday.co.uk - 12.02.2020
Duncan Leven to leave Radio Clyde after 26 years
Bauer Media’s Content Controller for the Greatest Hits Network in Scotland, Duncan Leven, is leaving the company next week after more than 26 years at Radio Clyde. The team at Clydebank in Glasgow was told earlier today that Duncan has decided the ‘time is right to look for some new challenges’. He’s been at Clyde since 1993 and has had a variety of roles both on and off air at the station and subsequently with Clyde 2 and the other Greatest Hits stations in Scotland...More >>
radiotoday.co.uk - 03.02.2020
Garry Spence to leave Capital Scotland for Clyde 1
Capital Scotland drivetime presenter Garry Spence is leaving the station after more than a decade to join commercial rival Clyde 1. Garry has been on drive on the Capital Scotland frequencies since the station rebranded from Xfm to Galaxy in November 2008. He’d previously been on Xfm Scotland’s weekend schedule, and had 3 years at Vibe in East Anglia after starting his career at MFR in his hometown of Inverness. Bauer says Garry will take over Clyde 1’s 4-6pm Home Run show from early 2020. He’s currently the only...More >>
radiotoday.co.uk - 08.08.2019
Meg McHugh to Chill on Hits Radio Scotland Network
Northsound Radio presenter Meg McHugh is to host the Hits Chilled show across the Hits Radio Network in Scotland. From Sunday 4th August, Meg will take over the Hits Chilled segment every Sunday to Thursday from 10pm to 1am across Clyde 1, Forth 1, Tay FM, Northsound 1, MFR, West FM and Radio Borders, replacing Ryan Borthwick. Joining the station in 2017, Meg began her career as a travel reporter on Northsound before covering a variety of shows across the station.More >>
radiotoday.co.uk - 03.07.2019
Bauer design agency reveals Hits Radio national roll-out
One of Bauer’s design agencies has offered an insight into the future of the Hits Radio brand after writing about its recent work on its website. Thinkfarm, which works with Bauer designing and promoting some of its radio stations, created the brand identity and marketing campaign for Hits Radio. It appears to confirm that Hits Radio will replace regional brands to create one national station.More >>
radiotoday.co.uk - 11.04.2019
Hits Radio to launch own UK Chart Show
Bauer is to broadcast its own chart show each Sunday afternoon following its decision to drop the Official Big Top 40 from Global. The UK Chart Show will broadcast every Sunday 4pm till 7pm with Sarah Jane Crawford across the Hits Radio Network from this Sunday, 6th January 2019. The programme will play “the hottest 30 tracks in the UK, airing what audiences are listening to, streaming, watching and downloading that week...More >>
radiotoday.co.uk - 04.01.2019
RAJAR Q3 2018: Regional and local radio round-up
Manchester is once again our focus on the local radio round-up, where the station previously known as Key 103 has lost more listeners. Hits Radio (Manchester) is reporting 325,000 weekly reach, compared with 374,000 last quarter. This is half the amount of listeners it had four years ago. Newly rebranded Key Radio (previously Key 2) has 53,000 listeners compared with 81,000 three months ago. Hits Radio’s Market Share has dropped from 5.2% to 3.9% and hours are down by 561,000 in three months.More >>
radiotoday.co.uk - 25.10.2018