(Votes:111, Average:4.3)
If the online broadcast of talkSPORT doesn't start, or lags, please contact us on the Contact page, or try to find the error on the Troubleshooting page. 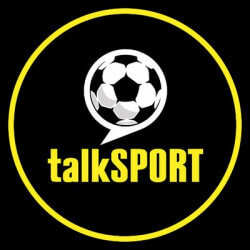 Listen online to the internet radio of talkSPORT live, home of rugby and football news.
talk SPORT is the leader radio of Wireless Group's radio station network, as the world’s largest clearly sports related radio station. In 2000, the launch of the radio was the exact answer to the all-time decisive nationally important sports-lovers community’s growing news-hunger. The broadcaster leads the competiton among the sports related commercial radios, by airing mainly football and rugby related content, football news, rugby news, but also cricket, horse racing, boxing, tennis, golf, and darts get in the scope occasionally. Most of UK’s important football and rugby matches, along with major european events are debated, football news with expert analyses, commentaries, exclusive interviews, and phone-ins. Moreover broadcasts worldwide every Premier League match in multiple languages. The scale of the station's increasing broadcasting rights necessitated the launch of talkSPORT 2 sister station in 2016, to cover together the whole field of sports events uncompromised.
The radio's kick-off in the mornings begins at 5am with the "Early Sports Breakfast with Paul Coyte" and continues from 6am to 10am with the "talkSPORT Breakfast" led by talkSPORT presenters Alan Brazil and Laura Woods.

Smooth Country
Leann Rimes - How Do I Live

kmfm
Ariana Grande - Thank U, Next

Isle of Wight Radio
Lizzo - 2 Be Loved (Am I Ready)

97.3 Apple FM Taunton
Something For The Weekend with Greg Perkins

XS Manchester 106.1
The Courteeners - You Over Did It Doll

45 Radio
Haddaway - What is Love

talkSPORT suspends radio presenter Trevor Sinclair after personal tweet
Sports commentator and presenter Trevor Sinclair will not be on-air for the foreseeable future at talkSPORT as the station investigates the circumstances and timing of a tweet he sent. The social media post, sent an hour after the death of Her Majesty The Queen was announced on Thursday, has attracted many comments and media reports...More >>
radiotoday.co.uk - 09.09.2022
talkSPORT and LBC News react to BBC dropping classified results
Following the BBC’s decision to end reading the full classified results on 5 Live, both talkSport and LBC News have reminded listeners they will still broadcast them. LBC News has previously broadcast a recorded version of the classifieds later on Saturday afternoon, but from this weekend it will broadcast the football scorecard live at 5.05pm every Saturday afternoon during the football season...More >>
radiotoday.co.uk - 11.08.2022
talkSPORT promises ‘biggest ever’ season of EFL coverage
talkSPORT is launching what it calls its “biggest ever” season of coverage for the English Football League. It gets underway this Friday at 8pm, when Huddersfield faces Burnley in the Championship. The network has carried extensive coverage of the EFL since a deal was struck with the Wireless Group in 2017...More >>
radiotoday.co.uk - 26.07.2022
talkSPORT to cover UEFA Women’s Euros tournament for fans
talkSPORT is to broadcast every England match of the UEFA Women’s Euros tournament this summer along with the crunch games in the final stages. The network will also broadcast all of Northern Ireland’s games in England’s group including Norway versus Northern Ireland and Austria versus Northern Ireland, plus updates and analysis from the tournament across its schedule...More >>
radiotoday.co.uk - 13.06.2022
talkSPORT to broadcast England’s tour of the Netherlands
talkSPORT has won the exclusive rights to broadcast England’s three match ODI tour of the Netherlands in June. All three games will be played at the VRA Cricket Ground, Amstelveen, with the first game on Friday June 17, second on Sunday June 19, and the final fixture on Wednesday June 22...More >>
radiotoday.co.uk - 31.05.2022
talkSPORT announces new partnership with Cricket Ireland
talkSPORT has agreed a new partnership with Cricket Ireland to broadcast Ireland’s 2022 home fixtures against India, New Zealand and South Africa across the UK and the Republic of Ireland. talkSPORT recently expanded its international cricket coverage to broadcast India’s international fixtures, including series involving New Zealand, West Indies & South Africa...More >>
radiotoday.co.uk - 23.05.2022
talkSPORT is to air a documentary on legendary Leeds manager Don Revie
talkSPORT is to broadcast a documentary on the life of Don Revie, on the same day Don died in 1989. Revie’s Angels tells the story of the legendary Leeds manager and the incredible side he assembled in the 60s and 70s. Appearing in the programme are former Leeds winger Eddie Gray...More >>
ontheradio.co.uk - 30.04.2022
talkSPORT partners with The Cricketer magazine for new radio show
talkSPORT has partnered with The Cricketer for a brand new radio show on county cricket. Following On – County Cricketer starts today (Thursday) and will bring to life the county game for viewers and listeners, showcasing the professional game across the 18 counties. The show will be presented by two-time County Championship winner, Steve Harmison and...More >>
radiotoday.co.uk - 14.04.2022
Peter Schmeichel and James Haskell among those featuring in new talkSPORT series
talkSPORT is to air a new series of My Sporting Life, speaking to leading sports people across the world about their life in sport. Those to feature in the series include legendary goalkeeper, Peter Schmeichel, Queens Park Rangers Director of football Les Ferdinand, decorated cyclist Mark Cavendish, former England Rugby star James Haskell, Boxing promoter Barry Hearn and German football manager Jurgen Klinsmann...More >>
ontheradio.co.uk - 23.03.2022

OTB Sports
Highlights on Off The Ball