(Votes:17, Average:5)
Radio is offline!
Listen to the radio's earlier programmes again in the Archives!
Please share Your opinion and comments in the Facebook-comment box below the player! If the radio lags, or breaks, please send us a message on the Contact page! If the radio doesn't start at all, try to check the Troubleshooting page to find a solution! 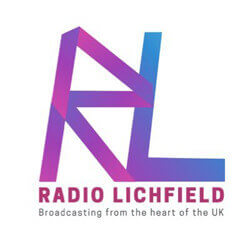 Listen to the internet radio of Radio Lichfield live, which launched in 2019 and broadcasts from its Lichfield studios, directly from the heart of the UK. The radio's creation comes from the the big national broadcasters' decision, when they closed their local programming, and left their listeners no choice but to listen to their national programming without any local relevance, for financial reasons.
Radio Lichfield stepped in the field of radio broadcasting to fulfill the vacant local broadcaster's role, and to operate a radio which can be felt much closer to its listeners than a centrally managed unresponsive giant from a distance.
The station operates as a 24/7 music radio bringing the best songs of various music genres from the last 50 years alongside with news bulletins and weather updates at the top of the hour. The diverse music spectrum of the broadcaster's playlist is ordered in decade and genre oriented programmes in its schedule. The decade oriented programmes are built of pop music generally, but the genre line-up expands by specialist shows which bring club, soul, funk, jazz funk, rock, heavy metal, soft rock and more in the air.

Radio Lichfield 's slogan: "From The Heart Of The U.K."

Heart FM
Janet Jackson - All For You

Smooth Radio
Foreigner - I Want To Know What Love Is

Heart Dance
Janet Jackson - All For You

U105
Reo Speedwagon - Keep On Loving You

3FM Isle of Man
Shania Twain - You're Still The One

Isle of Wight Radio
B.o.b / Bruno Mars - Nothin' On You

JACKfm
Was (Not Was) - Shake Your Head

SunKiss
Queen - Heaven For Everyone