(Votes:15, Average:4.6)
Please share Your opinion and comments in the Facebook-comment box below the player! If the radio lags, or breaks, please send us a message on the Contact page! If the radio doesn't start at all, try to check the Troubleshooting page to find a solution! 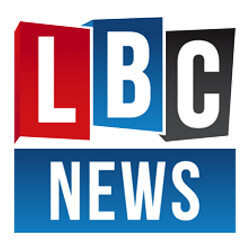 Listen to the internet radio of LBC News live which is LBC's sister station. The broadcaster is in the ownership of Global Media & Entertainment Ltd. Similarly to its parent station, LBC News is not interested in any musical content. So the released time is filled with current news about the world and the UK, especially about London and its agglomeration. Furthermore phone-ins, live conversations, traffic information and weather news diversify and make the informative broadcasting complete. The radio's mornings are led by Lisa Aziz who sets the starting lines of the daytime conversations on weekdays from 6am to 10am.

London area - 1152 AMYou can follow the broadcast on the analogue radio way on 1152 AM in London, and you can choose from several digital solutions like DAB Digital Radio and DigitalTV, we recommend the online radio stream.
DigitalTV: Sky - Channel 0221
Your favourite radios
LBC Radio - LBC 97.3
Steve Allen

Capital FM
Harry Styles - As It Was

Heart 80s
Whitney Houston - I Wanna Dance With Somebody

Radio X
The Fratellis - Whistle For The Choir

Nation Radio
Bon Jovi - You Give Love A Bad Name

House Party Radio
Jonas Blue ft. Theresa Rex - What I Like About You

Pure Radio
Pink - So What

RAJAR Q1 2020: London and national brands roundup
BBC Radio 2 has lost almost a million listeners in the last year, according to the Q1/2020 audience research from RAJAR. The reach of the UK’s biggest radio station fell from 15.356m at the start of 2019 to 14.362m over the first three months of this year. The two biggest commercial radio networks – Heart and Capital – both lost significant reach over the 12 months too. The Heart network lost 787,000 listeners to leave a reach of 7.737m, while Capital dropped 815,000 to 6.386m. When you add in the other Heart and Capital branded stations – 70s, 80s, 90s, Dance, Xtra and Xtra Reloaded – the Heart brand reaches 9.365m and the Capital brand 7.502m...More >>
radiotoday.co.uk - 14.05.2020
Prime Minister’s sister Rachel Johnson joins LBC
The journalist and broadcaster Rachel Johnson – who also happens to be the Prime Minister’s sister – is joining LBC to present a new Friday evening programme. Her show – an hour from 6pm until 7pm – begins tonight, with LBC saying she will bring her ‘unique insight, candour and personality’ to the station for a programme ‘packed with opinions, debate and the latest news’. Rachel Johnson said: “I am genuinely honoured that LBC has found a slot for me on its hallowed schedule alongside broadcasters I have listened to in awe for many years.”...More >>
radiotoday.co.uk - 24.04.2020
RAJAR Q4 2019: London and national brands round-up
Coverage of the general election helped 5 Live, Radio 4 and LBC each add half a million listeners across 2019. 5 Live is up from 4.9m to 5.4m in the Q4/2019 RAJAR listening figures, while Radio 4 has added a similar amount, rising from 10.4m a year ago to 10.9m now. LBC, including new digital station LBC News, posts a record high of 2.7m listeners (up more than half a million year on year), while talkRADIO is up more than 40% from 12 months ago to now have 433,000 listeners a week – another record high for the Wireless station...More >>
radiotoday.co.uk - 06.02.2020
Global to launch 24 hour rolling news radio station
Global is taking its London rolling news service national and around the clock as it launches LBC News on D1. LBC News will be on 1152 AM in London, in addition to Global Player and social media. With the strapline “Where The News Never Stops”, the station will operate under a full news update in 20 minutes every 20 minutes format, with presenters including former Sky News presenters Martin Stanford, Lisa Aziz, Ian Payne as well as Jim Diamond. LBC London News currently broadcasts in London for 13 hours a day, with the rest of the output taken from LBC...More >>
radiotoday.co.uk - 21.10.2019
RAJAR Q2 2019: London and national brands round-up
Zoe Ball has lost more than three quarters of a million listeners to her BBC Radio 2 breakfast show, according to the latest audience research from RAJAR. The show’s reach is down 781,000 quarter-on-quarter to 8.266m for the three months survey period up to the 23rd June 2019. In Q1/19 she had 9.047m listeners; in Q2/2018 Chris Evans reached 9.038m. Radio 2’s audience at breakfast is now the lowest its been since Q3/2010, when Evans was fairly new in the job.More >>
radiotoday.co.uk - 01.08.2019
LBC puts Tory leadership candidates on-air with Iain Dale
Conservative Party leadership candidates will each go head-to-head with LBC’s Iain Dale in a series of one-hour programmes next month. In the race to be the next Prime Minister, the candidates will be live during Iain Dale in the Evening, starting with Rory Stewart, the Secretary of State for International Development and the MP for Penrith and The Border, on Monday 10th June.More >>
radiotoday.co.uk - 29.05.2019