(Votes:22, Average:4.9)
If the online broadcast of House Party Radio doesn't start, or lags, please contact us on the Contact page, or try to find the error on the Troubleshooting page. 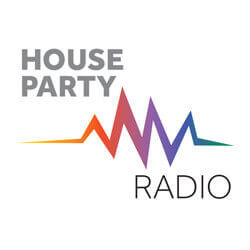 Listen to the internet radio of House Party Radio live, which broadcasts from Liverpool, with the biggest house and dance tracks takes You back by the flashbacks and old skool anthems, with big DJs and shows such as StoneBridge, Jason Fubar, John Gibbons, Dots per Inch, David Dunne, Kev Woods, Keith T, Tom Taylor, Antoni James, Jepo, mixed up by Johnny Bee with The House Party show. In 2018, the idea of opening an online radio station came alive, which was a follow-on from the radio show House Party, hence the name of the station - House Party Radio, playing all the biggest remixes and some of the biggest old skool classics that had been played over the years. In August 2019 the station started broadcasting online as a stream to friends and family which gave the crew the idea how they really wanted the station to sound, and in November 2019 the station started to broadcast public with some big-name DJs altogether with massive remixes. The station aspires to ensure and develop further an immersive and enjoyable radio broadcast for the lovers of house, dance and oldskool.

Heart 80s
Terence Trent D`arby - If You Let Me Stay

Smooth Chill
GELKA - Please Keep Your Ticket Till The End

Sun FM
Billy Ocean - When The Going Gets Tough...

Premier Christian Radio
All Together Now with Pam Rhodes

DJ On Tap
Thomas Dolby - She Blinded Me with Science

Times Radio
Alexis Conran - A deeper look back at the week

Nation Radio
Deniece Williams - Let's Hear It For The Boy

3FM Isle of Man
Bruce Springsteen - Dancing In The Dark

Pure Radio
Johnny Mathis - When A Child Is Born

45 Radio
Luther Vandross - Never Too Much

House Party Radio launches on local DAB digital radio in Glasgow
House Party Radio has launched on the small-scale DAB multiplex in Glasgow. House Party Radio started three years ago by Station Director John Beddows a.k.a. Johnny Bee who has been hosting a radio show of the same name for over 15 years...More >>
radiotoday.co.uk - 03.09.2022