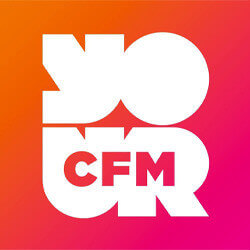 Listen to the internet radio of CFM live, which has been broadcasting since 1993 as a local radio for the people of Cumbria and South West Scotland. The broadcaster is in the ownership of Bauer Radio Ltd., member of the Planet Radio station fleet, part of Bauer’s Hits Radio Network.
The programming of CFM radio is partly locally produced, and partly networked broadcasting from the Hits Radio Network. The radio's playlist lines up the last 30 years' most popular hits alongside with the current most popular music. The station informs its listeners about Cumbria and South West Scotland with local news, sports, travel-traffic and weather reports.
The broadcaster's refreshing morning show "Robbie Dee In The Morning" is led by Robbie Dee on weekdays between 6am and 10am, while the weekend starts with Fleur East from 9am to 12pm on Saturdays. On Sundays "The UK Chart Show" is broadcasted from 4pm to 7pm, which is Bauer's own chart show led by Sarah-Jane Crawford, with the hottest 30 songs.

Boom Radio
The Alan Parsons Project - The Turn Of A Friendly Card (...

Pure Radio
Gotye Featuring Kimbra - Somebody That I Used To Know

Christmas FM
Mariah Carey - All I Want For Christmas Is You

JACKfm
Florence And The Machine - Shake It Out

Manx Radio
Betty Boo, David Gray - Right By Your Side

Bauer to network drivetime across 11 licences in North and Midlands
Bauer Media has announced plans to network Wes Butters and Gemma Atkinson across most of its big city stations in England, meaning 7 presenters will lose their daily drivetime show. From 2nd September, Wes will be on 4-7pm across Metro Radio, TFM, Rock FM, Radio City, Hallam FM, Radio Aire, Viking FM and the four Free Radio stations in the West Midlands – in addition to his current show on Hits Radio in Manchester and on DAB across the UK. Gemma will join the show after her maternity leave...More >>
radiotoday.co.uk - 05.08.2019
Bauer gains approval to network breakfast shows
Ofcom has granted Bauer a number of Format changes to allow all of its stations to network all but three hours each weekday rather than the previous seven. UK commercial radio stations have been allowed to submit Format changes since the Localness Guidelines were amended last year, but Bauer has only just taken the steps required to allow this. Bauer can now share all programmes, with the exception of a three-hour show on weekdays (which doesn’t have to be breakfast), in the approved areas already suggested by Ofcom.More >>
radiotoday.co.uk - 08.07.2019
Bauer design agency reveals Hits Radio national roll-out
One of Bauer’s design agencies has offered an insight into the future of the Hits Radio brand after writing about its recent work on its website. Thinkfarm, which works with Bauer designing and promoting some of its radio stations, created the brand identity and marketing campaign for Hits Radio. It appears to confirm that Hits Radio will replace regional brands to create one national station.More >>
radiotoday.co.uk - 11.04.2019
Hits Radio to launch own UK Chart Show
Bauer is to broadcast its own chart show each Sunday afternoon following its decision to drop the Official Big Top 40 from Global. The UK Chart Show will broadcast every Sunday 4pm till 7pm with Sarah Jane Crawford across the Hits Radio Network from this Sunday, 6th January 2019. The programme will play “the hottest 30 tracks in the UK, airing what audiences are listening to, streaming, watching and downloading that week...More >>
radiotoday.co.uk - 04.01.2019

Pure Radio
Gotye Featuring Kimbra - Somebody That I Used To Know

Magic FM
The Police - Every Breath You Take

06:07Calvin Harris ft. Rihanna - This Is What You Came For