(Votes:35, Average:4.5)
Please share Your opinion and comments in the Facebook-comment box below the player! If the radio lags, or breaks, please send us a message on the Contact page! If the radio doesn't start at all, try to check the Troubleshooting page to find a solution! 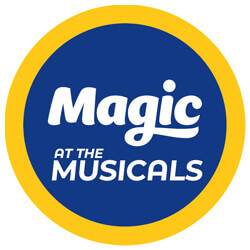 Listen to the internet radio of Magic at the Musicals live, which is Magic Radio's spinoff station featuring music from musicals 24/7 since 2020. The radio is in the ownership of Bauer Media Ltd., and part of the Planet Radio station group.
The musical repertoire spans from the proved classics to the latest of West End, Broadway and Hollywood pieces, and also re-imagined musicals shift the tune kit of the radio. The station's playlist is supervised, and the talk programmes with exclusive interviews are led by presenters from the musicals' world like Ruthie Henshall, Hannah Cox, Lucy Ford, Alex Baker, Jim Davis, Julian Bird, Dan Morrissey and Tom Chambers.

The broadcast is not available on the traditional analogue way, but on the digital ways like DAB Digital Radio, we recommend the online radio stream.
Your favourite radios
LBC Radio - LBC 97.3
Ben Kentish

talkSPORT
Kick Off with Adrian Durham

Q Radio
Kooks - She Moves In Her Own Way

3FM Isle of Man
John Legend - All Of Me

Pure Radio
Simple Minds - Dont You (Forget About Me)

SunKiss
Tears for Fears - Sowing The Seeds Of Love

Magic at the Musicals returns to London’s Royal Albert Hall
The Magic at the Musicals event is back at London’s iconic Royal Albert Hall on 17th October 2021. Hosted on the night by Magic Radio’s Ruthie Henshall and comedian and West End performer Jason Manford, the evening will showcase feature performances from some of the West End’s leading stage stars as they come together for one night only...More >>
radiotoday.co.uk - 26.08.2021
Bauer stations team up with Disney for ticket giveaway
Listeners across some Bauer stations will get a chance to win tickets for Disney’s The Lion King, Frozen the Musical, and Beauty and the Beast this month. In a deal with Disney Theatrical Group, Magic Radio, Magic at the Musicals, Scala Radio, Absolute Radio and KISS will give away over 3,000 tickets to theatregoers who have missed live entertainment throughout the pandemic to its shows. Throughout May, all stations will give away on-air spot prizes...More >>
radiotoday.co.uk - 10.05.2021
Magic with the Musicals planned for the Palladium
Magic is bringing together over 70 figures from musical theatre at the London Palladium on September 17th. The day – produced by Magic together with TBI Media – will result in a special three-hour show airing on Wednesday 23rd September on Magic Radio and Magic at the Musicals. In addition to interviews throughout the day, the stage will feature West End performers recording exclusive ‘live’ performances from supporting musicals including MAMMA MIA!; Dreamgirls; Disney’s: The Lion King; Juliet and more. Eleven performances in all will be recorded, with a live, 23-piece orchestra including members of the London Musical Theatre Orchestra...More >>
radiotoday.co.uk - 15.09.2020
Bauer launches Magic 100% Christmas in August
Bauer Media has today launched pop-up station Magic 100% Christmas – four months before the big day. The station will be online only this year, with Bauer saying the service is needed to lift the spirits of the UK. Tony Moorey, Group Content Director, Magic Radio, told RadioToday: “At Magic Radio we are constantly evolving our offerings and launching innovative new shows and stations to ensure that we reflect our audience’s needs. “With listeners seeking cheer and fun during these challenging times and a strong understanding of how music and Christmas are interlinked, we knew that the next expansion of the Magic brand had to be around the joy of Christmas.” ...More >>
radiotoday.co.uk - 25.08.2020
Bauer to launch Magic at the Musicals on DAB+
Bauer is launching another new radio station from Golden Square, this time playing music from musicals. Magic at the Musicals will be available on DAB+ in and around London from Thursday 21st November with presenters including Ruthie Henshall (Chicago, Cats) and Jonathan Bailey (Broadchurch, Doctor Who, W1A, Company) The schedule will also include Louise Dearman (Wicked) John Owen-Jones (The Phantom of the Opera), alongside Julian Bird (CEO of SOLT and UK Theatre) and special shows from Luke Evans (film: Beauty and the Beast, Clash of the Titans; Stage: Rent, Miss Saigon), Alfie Boe (Les Miserables) and others.More >>
radiotoday.co.uk - 14.11.2019

Absolute Radio Country
Kenny Chesney - Save It For A Rainy Day

20:18Girl From The North Country - Like A Rolling Stone/ Make You Feel My Love

19:49Hamilton - The Room Where It Happens

19:43My Fair Lady - Wouldn't It Be Loverly
Get older songs

Magic at the Musicals's schedule09