(Votes:20, Average:4.9)
Please share Your opinion and comments in the Facebook-comment box below the player! If the radio lags, or breaks, please send us a message on the Contact page! If the radio doesn't start at all, try to check the Troubleshooting page to find a solution! 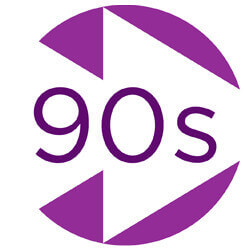 Listen to the internet radio of Absolute 90s live, which is the sister station of Absolute Radio and is in the ownership of Bauer Radio Ltd., and member of Planet Radio station fleet.
The playlist of Absolute 90s Radio focuses on the music of the last decade before the millenium. The last decade when the music have yet the traces of their organic origins, when the soundwaves were not entirely redesigned by sound enhancer computer programs. The last decade when the band members knew each other, as the listeners knew the bands too. While in the 80’s, the new electronic devices were just to help in expressing musical imaginations, in the 90’s, the cube slowly turned, throughout the decade, and the digital had become the dominant actor in the music industry.
The collision between the analogue and digital had not been so perceptible before, musical genres, subgenres disappeared, and new ones emerged in the cataclysm.
The broadcaster shows both faces of the final clash decade between analogue and digital. The larger part of the playlist is for the last heroes of real music, while the smaller part is for the new, digitally created music. The selection from the new genres also mirrors the Absolute Brand’s ars poetic, which stands up for the importance of "real" in music, so the station carefully selects the true musical value carrier music pieces from the digitally created ones too. This way the station's music line-up brings the bests of pop, rock, electronica, house, techno and trip-hop.
The radio offers in its schedule the “No repeat guarantee” on weekdays between 10am and 4pm, so You won’t hear the same track twice in that time.
The station wakes the listeners and sets the vibes of the weekdays' mornings with "The Dave Berry Breakfast Show" on weekdays from 6am to 10am with Dave Berry and Matt Dyson. The programme also provides fresh news packages to the listeners by Emma Jones. The Saturday mornings are ignited by "The Frank Skinner Show" led by the award-winning comedian Frank Skinner.

The broadcast is not available on the traditional analogue radio way, but can be reached by digital solutions like DAB Digital Radio and DigitalTV, we recommend the online radio stream.
DigitalTV: Sky - Channel 0201
Your favourite radios
LBC Radio - LBC 97.3
Ben Kentish

talkSPORT
Kick Off with Adrian Durham

U105
Bruce Springsteen - Dancing In The Dark

Pure Radio
Amy Macdonald - This Is The Life

JACKfm
Alisha's Attic - I Am I Feel

Joy Hits
Cassette - Tell Me Why

Gaydio
David Dunne - in the mix

45 Radio
Gloria Gaynor - I Will Survive

RAJAR Q1 2020: London and national brands roundup
BBC Radio 2 has lost almost a million listeners in the last year, according to the Q1/2020 audience research from RAJAR. The reach of the UK’s biggest radio station fell from 15.356m at the start of 2019 to 14.362m over the first three months of this year. The two biggest commercial radio networks – Heart and Capital – both lost significant reach over the 12 months too. The Heart network lost 787,000 listeners to leave a reach of 7.737m, while Capital dropped 815,000 to 6.386m. When you add in the other Heart and Capital branded stations – 70s, 80s, 90s, Dance, Xtra and Xtra Reloaded – the Heart brand reaches 9.365m and the Capital brand 7.502m...More >>
radiotoday.co.uk - 14.05.2020
RAJAR Q4 2019: London and national brands round-up
Coverage of the general election helped 5 Live, Radio 4 and LBC each add half a million listeners across 2019. 5 Live is up from 4.9m to 5.4m in the Q4/2019 RAJAR listening figures, while Radio 4 has added a similar amount, rising from 10.4m a year ago to 10.9m now. LBC, including new digital station LBC News, posts a record high of 2.7m listeners (up more than half a million year on year), while talkRADIO is up more than 40% from 12 months ago to now have 433,000 listeners a week – another record high for the Wireless station...More >>
radiotoday.co.uk - 06.02.2020
New presenters for Absolute Radio late shows
The Absolute Radio late show will be re-launched in the New Year with Jay Lawrence on weeknights and Dan Noble on weekends. Jay joined the station in 2018 and this year launched Through the Decades on weekends, playing three hours of music from the brand’s decade stations – Absolute Radio 60s to Absolute Radio 10s. He’ll move to weeknights, Monday-Thursday 10pm – 1am, bringing Through The Decades to the first hour of each programme, and will also become the host of Rock N Roll Football on Sundays...More >>
radiotoday.co.uk - 16.12.2019
Absolute Radio’s Hometime expands across network
Absolute Radio’s Hometime show is to be shared across the other Absolute-branded stations, with 7 separate playlists. The programme, presented by Andy Bush and Richie Firth for the last year, will air on Absolute’s decades stations – 60s, 70s, 80s, 90s and 00s – as well as Absolute Classic Rock and the main station. The split playlist technology developed by RCS and Bauer is already used on the Dave Berry Breakfast Show to enable genre specific music for each service alongside the live presenter content.More >>
radiotoday.co.uk - 17.09.2019
Heart 90s to launch on national DAB digital radio
Global is transforming its Heart 90s playlist service into a full national radio station on DAB, with Kevin Hughes hosting breakfast. It’s the first of five new services all going national on DAB in the next week – as teased by Global over the last few days. Heart 90s will officially launch tomorrow at 6am – Thursday 29th August – with non-stop music from the 90s and joins Heart, Heart Dance and Heart 80s which all have live national breakfast shows from Leicester Square. Kevin Hughes currently hosts Saturday afternoons on Heart, and previously presented Drive on Heart South Wales...More >>
radiotoday.co.uk - 28.08.2019
RAJAR Q2 2019: London and national brands round-up
Zoe Ball has lost more than three quarters of a million listeners to her BBC Radio 2 breakfast show, according to the latest audience research from RAJAR. The show’s reach is down 781,000 quarter-on-quarter to 8.266m for the three months survey period up to the 23rd June 2019. In Q1/19 she had 9.047m listeners; in Q2/2018 Chris Evans reached 9.038m. Radio 2’s audience at breakfast is now the lowest its been since Q3/2010, when Evans was fairly new in the job.More >>
radiotoday.co.uk - 01.08.2019
Ross Buchanan joins Absolute Radio for weekend breakfast
Absolute Radio has signed former Radio X presenter Ross Buchanan to present weekend breakfast. Ross will also host a number of shows across the network of seven Absolute Radio stations. Absolute Radio Content Director Paul Sylvester told RadioToday: “Ross is a passionate music fan and this is a great opportunity for him to share his love on-air. He’s got a great personality and we’re delighted to give him a platform to develop.”More >>
radiotoday.co.uk - 12.06.2019
RAJAR Q1 2019 – Zoe & Chris plus national and London radio round-up
Chris Evans and Virgin Radio both reached over a million listeners in the first quarter of 2019. The digital station’s audience has almost trebled compared with the last period of 2018 thanks to the arrival of Evans from Radio 2. In Q1/2019 it posts a weekly reach of 1.3m and total hours of 7.765m. A year ago those figures were 427,000 and 1.632m. Last quarter they were 447,000 and 1.686m.More >>
radiotoday.co.uk - 16.05.2019
RAJAR Q3 2018: Record share of 52.4% for digital radio
Digital listening share has remained above the important halfway mark and increased from 48.8% to 52.4% in the last 12 months. Total digital listening hours grew by 5.4% year on year, or 27.5 million hours. DAB listening in cars accounted for 11 million hours (or 40%) of all digital listening growth, while listening in home via online/Apps accounted for 13.5 million hours (or 49%) of all digital listening growth.More >>
radiotoday.co.uk - 25.10.2018

Absolute 80s
Foreigner - I Want To Know What Love Is

Absolute Radio
Embrace - We Are It

21:09Metallica - Nothing Else Matters
Get older songs